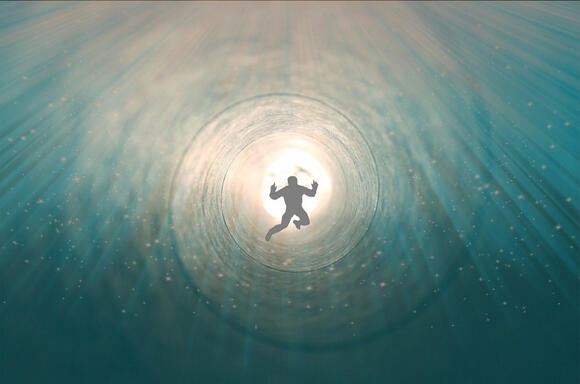 One of the big mysteries of life is what comes after death. Religions over many centuries have come up with different concepts of what humanity defines as an “afterlife” a continuation of our soul’s journey. Those of a Christian faith believe that based on their actions and choices they will either end up in heaven or hell. Other religions believe that they will be reincarnated as a different person or even animal.

Scientists also theorize that something must happen after death and have started to embrace the idea of an afterlife, not based on religious beliefs but on the experiences that people who nearly died had. One of the most recorded events that take place right before the death of a person is having their life flash before their eyes.

This is not only presented in a large number of movies and books but has been accounted for by medics who saved their patients who were very close to death. An old study performed by The Missouri State Medical Association reported that only 17% of those who nearly died experienced near-death experiences. In many cases, most people fall into an unconscious state.

Specialists who have been studying this matter have discovered that there is a pattern based on the consciousness of a person. Those that are more religious tend to see God or other biblical characters when experiencing close death. Another aspect that confirms this is that each near-death experience is quite unique to every person as every consciousness is different.

Doctor Raymond Moody, one of the first specialists to look into this matter has recorded many different accounts of near-death experiences in his book entitled “Life after life”.

“While no two NDEs (near-death experiences) are the same, there are characteristic features that are commonly observed in NDEs. These characteristics include a perception of seeing and hearing apart from the physical body, passing into or through a tunnel, encountering a mystical light, intense and generally positive emotions, a review of part or all of their prior life experiences, encountering deceased loved ones, and a choice to return to their earthly life.” (Quote by Doctor Raymond Moody)

Scientists have analyzed patients that have been in an unconscious state whilst having near-death experiences and concluded that from a logical point those patients should not be able to have lucid experiences, which makes them believe that the soul or consciousness is making a spiritual transition towards the next life or afterlife, triggered by physical near-death state of the body.

In another study done by The New York Academy of Sciences, medical specialists have looked specifically into near-death experiences caused by cardiac arrest and during such an urgent event, the human body, as well as the mind, should not be able to have full consciousness, therefore not able to remember a lucid “dream” of the afterlife.

“The fact that people seem to have full consciousness, with lucid well-structured thought processes and memory formation from a time when their brains are highly dysfunctional or even nonfunctional is perplexing and paradoxical.” (Quote by Robert Birchard/NYAS)

Science challenges the ideologies presented by religion, but in many cases such as this one, not even science can describe how exactly near-death experiences are possible, therefore agreeing to the idea that there is life after death.

Previous Post: Scientists Discovered a Planet Where Humans Can Live Up to 9,943 Years Old

Next Post: The Youngest Mother in the World Gave Birth at the Age of 5