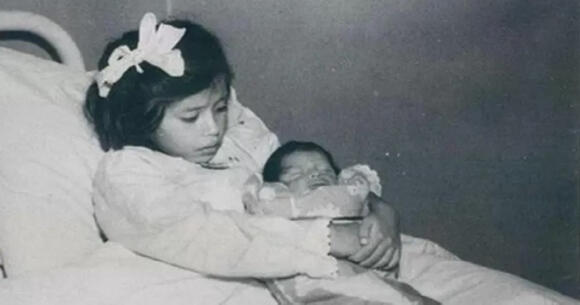 Lina Medina Marcela has been holding the title of the youngest mother in the world for the past 83 years. She gave birth in 1939 when she was only 5 years old and it came as a surprise to the whole world because at the time no one understood how this was possible from a scientific point of view.

This was not known by the world as due to the lack of internet, the news was traveling a lot slower back in the day. Lina was born in Peru and South America had a smaller population compared to today. It was only in 1957 when TIME published a news article mentioning the event that occurred in 1939.

When Lina was about five years and six months old, her parents Victoria Lose and Tiburelo Medina noticed her stomach abnormally swollen, thinking that some sort of tumor was being developed within Lina’s stomach. When they visited Dr. Gerardo Lozada, they could not believe the diagnosis given doctor. It was not a tumor or health problem that was causing the abdominal swelling, Lina was in fact seven months old.

Her father (Tiburelo Medina) was arrested by police as he was suspected of impregnating his daughter. After not finding enough evidence, they arrested an orphaned cousin of Line who was only 22-year-old. The young man was charged with rape, despite no clear evidence to prove this.

Lina was helped by Obstetrician Rolando Colareta through her pregnancy. He explained that rape of minors was nothing out of the ordinary within Peru, but pregnancy was considered impossible at such a young age.

“The rape of minors is nothing so unusual here or anywhere else. But of course, rape does not mean pregnancy in children so young except in rare cases.” (Quote by Rolando Colareta)

During her two months left of pregnancy, Lina had gone through 16 obstetricians, radiologists, psychiatrists, and different specialists that tried to understand how it was possible for her to become pregnant at such a young age. Girls usually hit puberty at the age of 12, whilst boys take longer to reach puberty.

In Lina’s case, as well as other children over the 20th century, her body was developing very quickly to an adult despite her young age or size. Her organism was developed in order to support a pregnancy. Much later, doctors defined this as Precocious Puberty, however, they still do not understand what exactly is causing this rare condition.

On May 14th, 1939 Lina gave birth to a boy by a cesarean section in order to not put her health at risk. The surgery was performed by Dr. Busalleu with the help of Dr. Colareta. The boy was perfectly healthy, weighing 6 pounds (2,700 grams) and well-formed all around. The young age of his mother did not affect him in any way.

Lina named her boy Gerardo, after the doctor who helped her through her pregnancy. Lina’s parents tried to offer her and her child the best possible childhood and explained things as they gradually grew up. For many years Gerardo was told that Lina was his sister.

To this day, Lina is still alive and well at the age of 88, living in Ticrapo, Peru. Gerardo sadly died in 1979 due to a bone disease.

Previous Post: Scientists Say That Near-Death Experiences Prove There Is an Afterlife