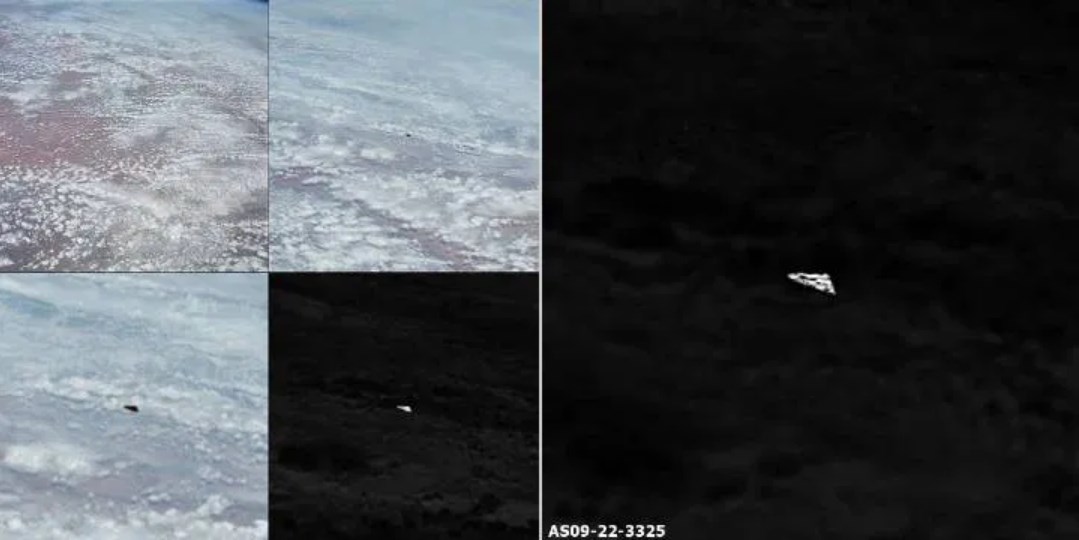 The photo, which shows the Chuska Mountains in Arizona, USA, from the orbit was taken during the Apollo 9 mission on March 8, 1969.

Recently it was shared in an open topic in the forums of The Black Vault site , where the user Willease published a large number of official photographs of the US space agency that stand out for having some anomaly.

Among them, the one illustrated in this article stands out. It was taken 194 km high and between the landscape, interrupting its uniformity, a small black spot can be seen. When enlarging, an object with a triangular shape is noticed, similar in appearance to airplanes such as the SR-91 Aurora or the TR-3B. The problem is that these ships were developed in secret projects of the 80s and 90s, that is, at least 20 years after the Apollo 9 mission took the picture.

Several commentators point out that it could be an alien ship or simply space junk. You. what do you think?

Other anomalies in the Apollo 9 mission

Apollo 9 was the third manned space mission in the United States Apollo program, the second to be sent into orbit by a Saturn V rocket, and the first flight of the command and service module (CSM) with the Apollo lunar module (LM ). The three-person team of the mission was made up of Commander James McDivitt, the pilot of the command module David Scott and the lunar module pilot Rusty Schweickart. The crew spent ten days in low Earth orbit testing several critical aspects to land on the Moon, including LM engines, backpack life support systems, navigation systems, and docking maneuvers.

But the main photo of this news is not the only one taken by the space mission where anomalies are observed. There is also the following taken on March 10, 1969:

It shows what appears to be three large cylindrical objects in the vicinity of the Moon. In the original on the NASA site, there is no reference to what the anomaly may be, or if it is a reflection or failure of the camera, it only says “Moon View. “

Next Post: The Mysterious “Extraterrestrial Music” heard by the Apollo 10 on the hidden face of the Moon (Video)