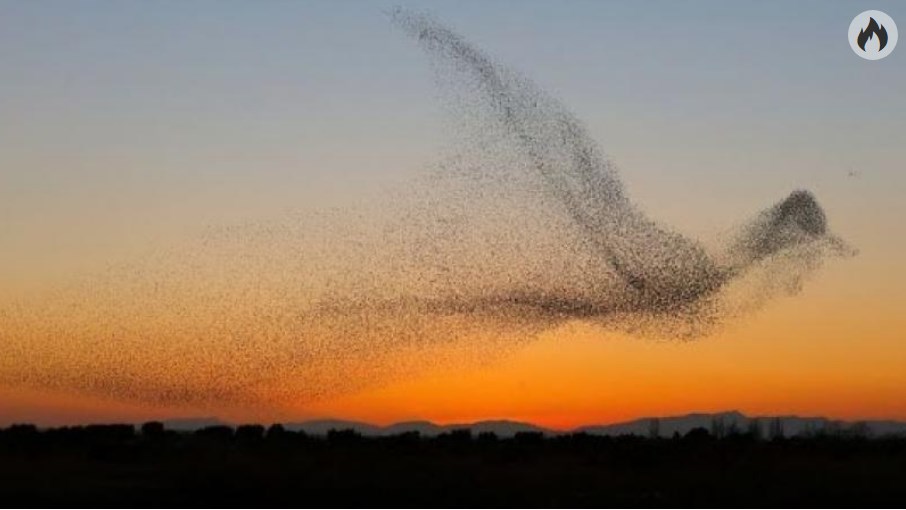 Photographer didn’t notice he had taken an award-winning image until he got home.

Daniel Biber, an amateur photographer from Hilzingen in Germany, was attempting to capture an image of starlings migrating in a vast swarm. Bilber succeeded in this, but he didn’t realize quite how remarkable his photographs were until he got home.

Bilber was visiting the Costa Brava in the north east of Spain when he spotted a mass of starlings flying together in a synergetic formation known as a murmuration. These swarms of birds can contain hundreds or even thousands of individuals and often produces astonishingly beautiful results as the birds maneuver themselves in the air to form incredible shapes.

While Bilber was observing the gigantic swarm, the starlings began to become disturbed and began to swirl and twist as they flew through the air. This was most likely their response to the arrival of a predator bird such as a falcon or a hawk in the vicinity of their formation. Amazingly, the starlings managed to arrange themselves into a formation of a gigantic single bird, perhaps to intimidate their would-be predator.

Almost unbelievably, Bilber had no idea what he had captured initially.

This was an incredible payoff for Bilber who has attempted to capture starling formations numerous times over the years without a great deal of success. “I’ve tried to photograph the starlings but it never worked out as well as I hoped for, ” he explained. “’I eventually drove to the spot every day for four days in a row in order to capture them. I picked a spot where I thought they would turn up and picked a matching foreground and backdrop in order to put them in scene.”

Bilber submitted his astonishing picture to an international photography competition where he managed to scoop a prize, a true testament to the value of patience and perseverance.