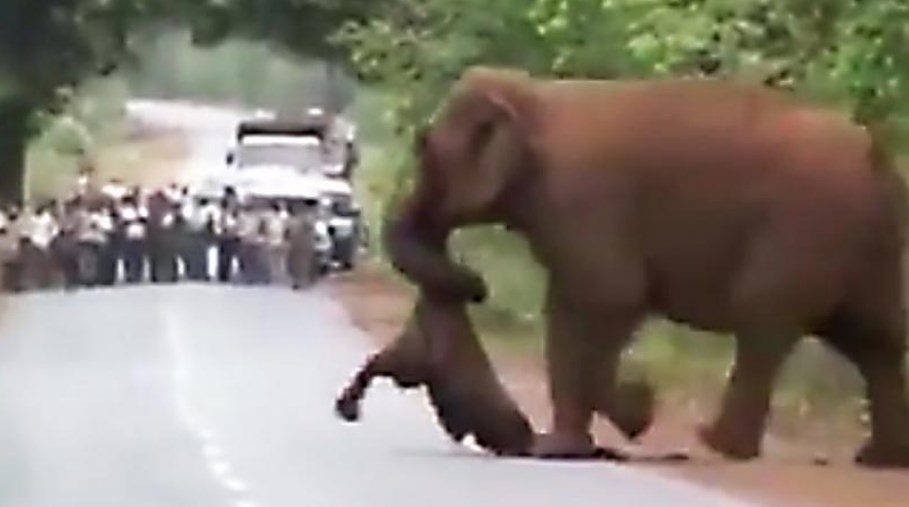 Elephants are known to be extremely protective of their young. Not only are they very protective, but they’re also highly intelligent animals. In fact, when one of their own passes away, they mourn, similar to human beings. A moving video captured such an occasion.

Parveen Kaswan filmed and posted a video of an elephant and it’s herd mourning the death of one of their calves. The extraordinary footage was posted on Twitter by Parveen, who is a forest ranger in the Indian Foreign Service, on Friday.

The video shows a grown adult elephant emerging from dense woodland by the side of a road. Using its trunk, it carries the lifeless body of a deceased calf, showcasing the strength and emotion that elephants experience, as well as the dedication of the entire herd. The huge mammal gently lays the calf’s body down on the road as the rest of the herd slowly follows in a solemn procession, resembling a traditional funeral line.

It’s clear that no member of the herd wants to leave the poor, dead calf. As the group begins to assemble, a number of elephants interact with the calf’s lifeless body. A couple of adult elephants nudge and regard the body before another adult lifts it once again. Gradually, the procession moves across the road and back into the forest on the other side, still carrying the deceased calf.

The video also depicts a number of stationary vehicles with the drivers standing outside and watching. Given the fierce nature that elephants have around their young, these people were right to keep their distance. The post on Twitter amassed a huge number of responses with over 15,000 likes and 7,000 retweets. The emotion in the comment section was also extremely moving.

Previous Post: Photographer Took One In A MILLION Photo, Didn’t Know Until He Got Home

Next Post: Texas Teenager Throws Pizza Party For Homeless Instead of A Graduation Celebration