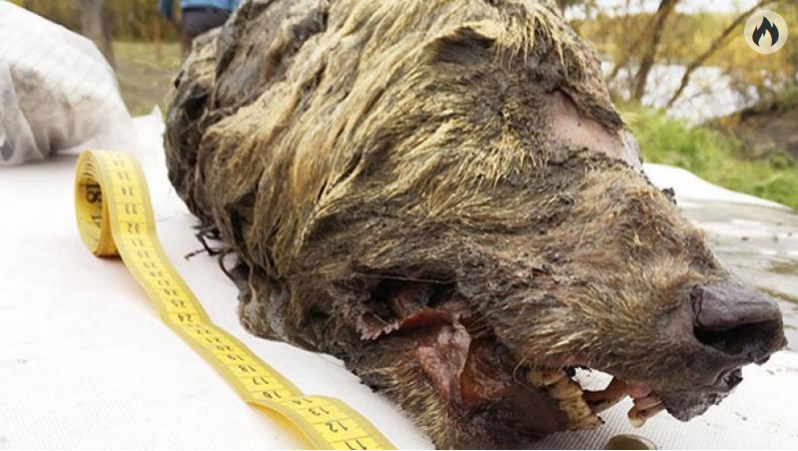 When scientists and researchers dig things up from the past, especially animal or human remains, they are either just skeletons or they’ve been fossilized. However, that’s not always the case. One such example would be the wolf head and lion cub that were discovered in Siberia back in 2018. Estimated to be almost 40,000 years old, the head and the cub were almost perfectly preserved.

The giant wolf head was uncovered by a local man – Pavel Efimov – who found it in summer of 2018 on the shore of the Tirekhtyakh River, tributary of Indigirka. The head was estimated to be around 40,000 years old by Japanese scientists and is of a fully grown Pleistocene wolf. Thanks to the cold climate of Siberia and the permafrost that covers the land, the head, including its brain and all its tissue, has been perfectly preserved.

While it is technically a wolf, it’s not like modern day wolves. The Pleistocene wolf is much, much larger and its head alone is 40cm long, which is about half of the whole body length of a modern-day wolf which varies from 66 to 86cm. The way it has been preserved suggests that it died when it was snarling. The young adult was aged between two and four years old when it passed away. The rest of the body hasn’t been found.

Alongside the massive wolf head, a whole cave lion cub was found. Researchers believe that it died soon after birth. Again though, it is perfectly preserved in the permafrost. Both this lion cub and the wolf head could provide some massive insight into animals from the Pleistocene. So many unanswered questions about their ecology, capabilities, and lots more could be solved. Scientists hope to compare these animals using their brains to modern day examples and see how they match up.

What a remarkable find! To have not one, but two fully preserved pieces of history that are tens of thousands of years old is just mind-blowing. The muscles, organs, and all the tissue that has been perfectly frozen in time could offer so much information about the animals and the world that they used to live in our world, long before any of us were even born.

Next Post: Endangered And Extremely Rare ‘Magic Rabbit’ Spotted For The First Time In Decades