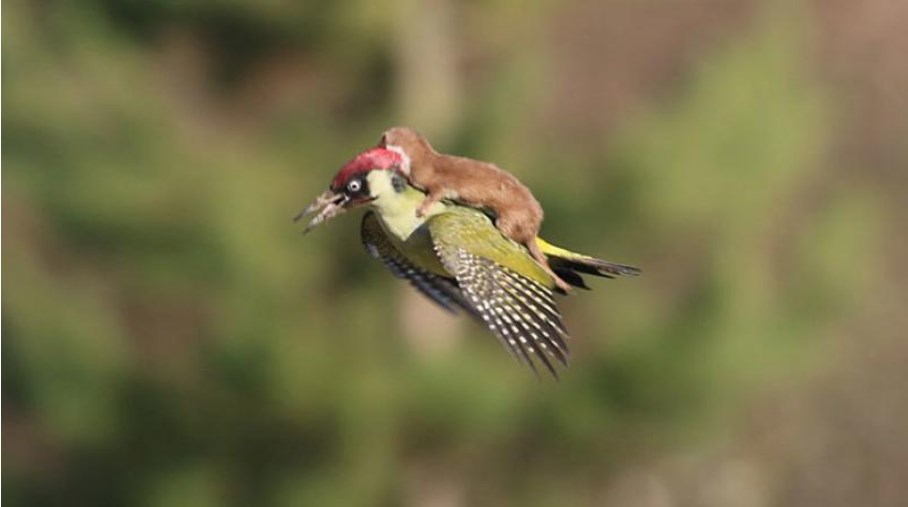 The animal kingdom never fails to surprise and these photographs are no exception. Martin Le-May, a casual photographer from East London, snapped a baby weasel enjoying what looks like quite an enjoyable ride on a woodpecker’s back. While it may seem cute and sweet, the truth behind the images is actually a lot more disconcerting.

Although it looks like a moment from a Disney film, the baby weasel and woodpecker are actually in a fight for their lives. The little weasel is hungry and wants to make a meal out of the woodpecker. Meanwhile, the woodpecker simply wants to live to see another day and so they are locked in a battle to the death.

The miraculous moment was caught on camera just by chance. While Le-May was enjoying a peaceful story with his wife around the park, he heard an animal in distress, which is when he stumbled upon the scene at Hornchurch Country Park. After taking a look around, they spotted the scramble between the two creatures taking place.

Just a few moments after they found the scuffle, the couple were shocked as they saw the woodpecker fly right past them with the weasel perched on it’s back. Wanting to capture the moment, Le-May quickly scrambled for his camera and began taking photos of the scene. Fortunately for the woodpecker, when it landed, the small mammal got distracted by Le-May and his wife, giving it a chance to make its escape. The weasel just scuttled away into the long grass, hungry.

As their name suggests, weasels are well-known for robbing nests and taking eggs for food. It is likely that this is what happened here, not that the small mammal expected the woodpecker to put up such an epic fight.

Previous Post: Human RFID Chips Will Not Be Optional and They Will “Change The Very Essence of What It Is To Be Human”

Next Post: The Number Of Americans With “No Religion” Has Tripled Over The Last 30 Years