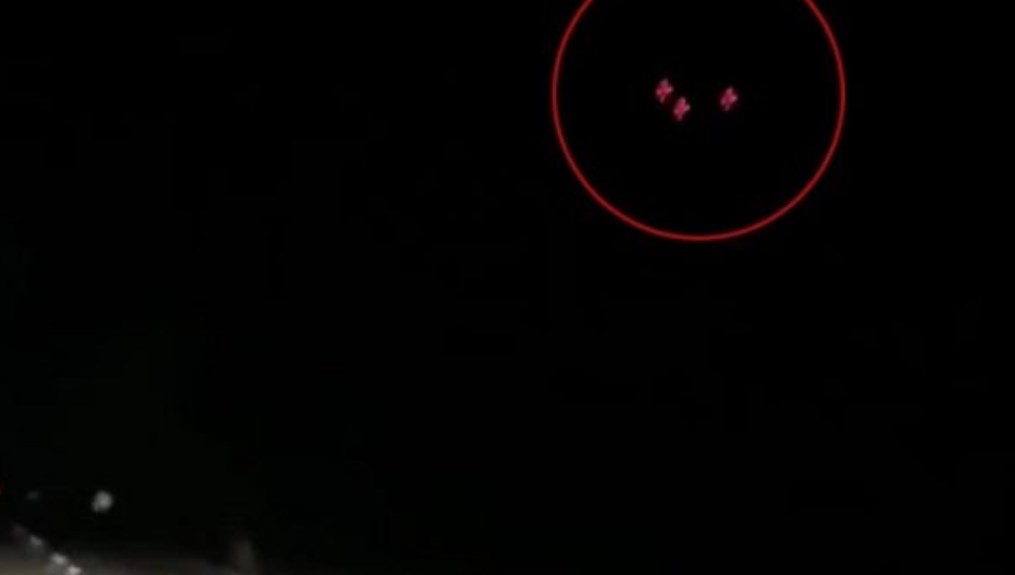 SPOOKY footage shows a blank triangular UFO with red flashing lights hovering over a car as the terrified driver can be heard bursting into tears and saying”f**k, f**k”.

The driver then leaves her husband a series of panic-stricken voice messages, shared with Sun Online, in which she tells him “Baby I’ve just seen a spaceship.”

The motorist spotted the strange black triangle with red lights underneath it while driving home from a dance class in Nashville, Tennessee, in the USA.

She was recording herself singing on her phone when she decided to point the camera towards the road ahead.

Suddenly three red lights appeared in the distance and started moving slowly towards her car.

As they got closer, the woman sees them and she can be heard whispering “f**k, f**k” before she bursts into tears in sheer panic – and tried to call her husband.

The driver told Sun Online: “I kept looking in my back seat just to make sure I was still alone in my car. I was terrified but my husband wouldn’t answer his phone.”

She described the craft as a large black triangle covered in red lights, which was “shiny and had a very sleek design”.

The witness, who does not wish to be named, spotted the weird lights near the city of Murfreesboro last Tuesday at around 11.30pm.

She explained: “I was driving home from Nashville, I was alone and I was singing. All of a sudden it just seems to appear out of nowhere and it was hovering over my car.

“It was probably the size of three cars but it was a triangle. There was no sound.

“It was black and had a very nice sleek design.

“The red lights where all nicely placed in rows, but there were some line shape lights. The material was shiny.

“The brightness of the lights weren’t extremely bright because I don’t remember the red being reflected anywhere or like inside my car. Unless it was too far away for it to make my car reflect red light.

“I started to cry and my initial thought was confusion because I was wondering what a device like that is doing out here and so low to the ground and because I didn’t know what I was looking it.

“It was completely foreign until I had the realisation that it was absolutely a UFO.”

After the disturbing incident, she frantically tried calling her husband but she couldn’t get through to him.

“It had three points, it was a triangle and it was in the sky.”

In another voice message, realising she had inadvertently filmed the UFO, she says: “I have a video of it, I was recording as I was singing and I got it, I got it. I’m going to send it to you ok.”

Clearly frustrated by not being able to get through, she adds: “Why don’t you ever answer when I need you the most? What the f**k dude?”

The witness said: “I stopped recording so I could call my husband and get help or let him know what was happening because it felt like I was going to be taken. I sped up and all I could focus on was getting away from it.

“When I looked back the first time it was there then I looked again and it was gone, maybe it disappeared.

“I kept imagining that an actual alien would just appear on my back seat so I kept looking in my back seat just to make sure I was still alone in my car. I was terrified and my husband wouldn’t answer his phone. Until I sent him some voice notes.”

Eventually her husband texted her back: “Holy sh*t dude.”