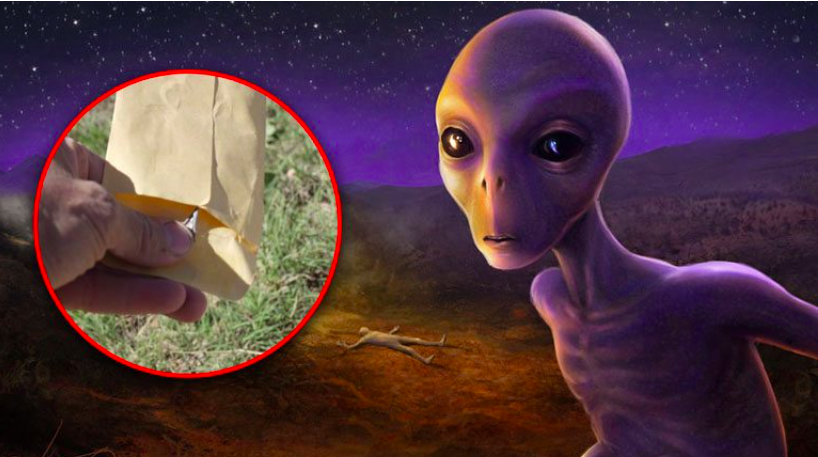 A mysterious metal fragment discovered near the infamous crash site could be the much-anticipated key to unlocking one of the oldest UFO enigmas in the world.

In his new book The 37th Parallel, author and UFO researcher Ben Mezrich reveals how he arrived at the conclusion that this metal piece might be a fragment from the the extraterrestrial craft that crashed near Roswell, New Mexico in 1947.

The author of The Accidental Billionaires (the book that became the basis for the movie The Social Network) explains that prior to this venture, he did not give the UFO phenomenon much credit.

I’m from a family of scientists and a skeptic,” he wrote. “I assumed most of the UFO community was crazy.

But after a sit down and a series of discussions with veteran UFOlogist Charles Zukowski, Mezrich rescinded his view on the matter and began a serious investigation aimed to uncover pieces of the hidden truth.

The 37th Parallel tells the story of how microchip engineer and former sheriff’s deputy Chuck Zukowski came into possession of the enigmatic metal fragment. In 2002, while combing the area near Roswell with a metal detector, Zukowski laid his eyes on a small, triangular piece of metal. The proximity to the crash site led him to believe the fragment could be an overlooked remnant from the much-disputed wreckage.

Recently, Zukowski sent a small piece from the fragment to be analyzed at a laboratory belonging to American space technology startup Bigelow Aerospace. He is still waiting for the results of the analysis, which could confirm the fragment is indeed extraterrestrial in nature.

The 37th Parallel is one and the same with the UFO highway, a 3,000 mile imaginary line that passes through Colorado, New Mexico, Utah, Arizona and Kansas. Also called the Paranormal Highway, this area has seen an unusually high number of UFO sightings and unexplained incidents, spanning from animal mutilations to stories of abductions and other levels of close encounters.

It is common knowledge among UFO enthusiast and conspiracy theorists that the enigmatic stretch of land holds many secrets. They find it highly suspicious that a number of major military bases are located along this line. After all, being close to where a phenomenon occurs is an assurance that you intent to observe and hopefully acquire one of the objects responsible for said phenomenon. Intervention time is crucial, especially when dealing with crafts that go from stationary to supersonic in the blink of an eye.

I believe that something happened at Roswell,” Mezrich confessed to his readers.

So do we. The Roswell crash site is located along the infamous 37th parallel and gained worldwide notoriety after military officials announced on July 8, 1947 that one of the notorious flying discs had violently come to a stop and was successfully recovered. But they immediately realized the error of doing so and on the same day, they withdrew that statement, saying that the object involved in the crash had been nothing more than a stray weather balloon.

Three decades later, prominent physicist and UFO researcher Stanton Friedman brought back into attention the controversial incident after speaking with Major Jesse Marcel, who was involved in the recovery and safe transport of the wreckage. Marcel revealed to Stanton that the whole thing was a massive cover-up created and maintained by intelligence services in order to keep nosy outsiders out of their business.

Incited by Marcel’s admission, other witnesses mustered the courage to come forth and tell their story. In the early 1980s, former mortician Glenn Davis shocked the world when he claimed that alien bodies were also recovered from the crash site. Later, another crucial piece of the puzzle would emerge in the form of witness statements disclosing that some extraterrestrial biological entities (EBEs) actually survived the crash and were quarantined at a top-secret U.S. Air Force Base in Nevada.

The conundrum would be further compounded when Bob Lazar revealed the existence of a facility called S4, located a few miles south of Area 51, where the military allegedly kept both crashed and functional UFOs.

We are now living through troubled times that are progressively getting worse and by the looks of it, even partial disclosure seems a pipe dream. Although secret documents are being made public or leaked, they are heavily redacted and offer little insight into this pressing global matter. Our best hopes lie with the dedicated men and women who tenaciously pursue the truth.

Let’s hope Mezrich is one of them and that he’s willing to enlighten and not just make a buck.

Next Post: Why is These Fleet of UFOs Leaving the Moon? Are They Harvesting Something? [+ 7 BONUS Lunar Theories]