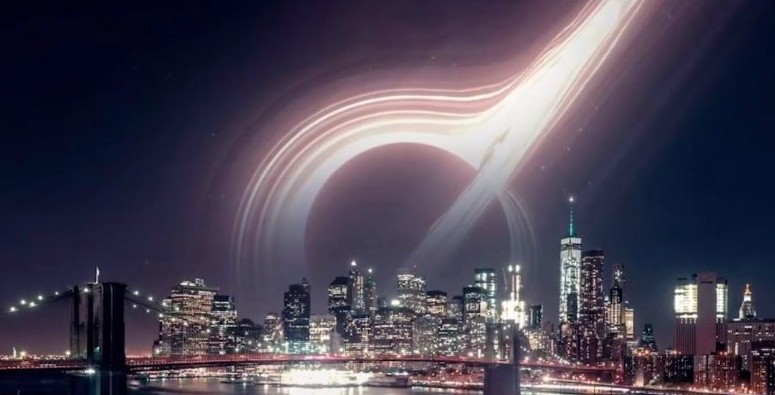 What would you do if a black hole’s accretion disk suddenly appeared in the sky as you look up up?

Eight planets, hundreds of moons, hundreds of thousands of asteroids, and billions of comets orbiting our Sun make up our Solar System. And not once has a single black hole disturbed our planetary routine. But what if it did?

Would this uninvited guest swallow up everything on its way through the Solar System? Or would it just slightly disrupt it?

Black holes aren’t exactly holes. They’re a large amount of matter that has been crammed into a very small space.

Being so compressed gives them an incredibly strong gravitational pull. Not even light can escape a black hole’s grasp.

And if you get too close to a black hole, you yourself would get compressed to an infinitely small dot. A black hole entering our Solar System would not be good news. But just how bad would that be?

Then, that gigantic black hole would tug whatever was left into an orbit around it. We’d be long gone by that time, wiped out by some rogue planet that smashed into Earth.

Let’s try our chances with a stellar black hole. This is a black hole that’s up to 20 times more massive than our Sun.

If this kind of black hole made it to the outer reaches of the Solar System, it would cause a gravitational mess in the Oort cloud – the area of icy, comet-like objects. A stellar black hole would hurl more comets and asteroids into the inner Solar System, where they could strike the planets. Earth might take some hits, too.

But that would be just a warm-up. As the black hole made its way through the Solar System, it would disrupt the orbits of all the planets in it.

Likely, our space intruder would tangle the biggest planet in the system, Jupiter. The black hole would pull all the gas from the giant planet, turning it into a swirling hot disk. It would keep pulling until it consumed Jupiter entirely.

What would happen to our own planet in this gravitational mess? Things wouldn’t be good for Earth. The black hole would start affecting us even from a distance of Pluto’s orbit. First, it would pull us out of the habitable zone, and we humans might not be ready to adapt to this change.

We wouldn’t have much time to complain since there would be worse things ahead. As the black hole approaches Earth, it would cause the cracking of the planet’s crust. We’d see extreme earthquakes and volcanic eruptions.

The ocean tides would be devastating, too. By the time the black hole passed Earth’s orbit, there would be nothing left of our planet but a sterile surface paved with magma.

Maybe Earth would be ejected from the Solar System altogether. That would probably be for the best because when the black hole got close enough to the Sun, it would start drinking up the Sun’s flaming gas, and pulling our center of gravity into its insatiable stomach.

If somehow, Earth stuck around for the afterparty, it would be torn to shreds and consumed by the black hole. Just one more way for Earth to come to an end. Luckily, black holes don’t seem to be very numerous in the Universe.

Next Post: Here Are 12 of the Deepest Holes on Earth