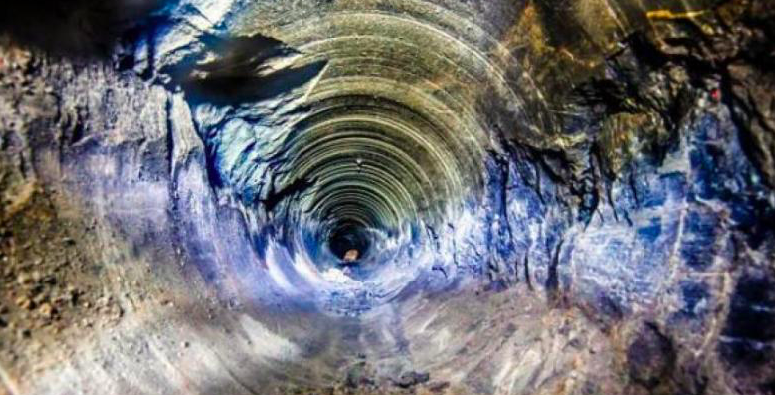 As much as mankind loves exploring the universe, we love exploring what’s beneath the oceans, although not quite as passionately. Thirdly, we also love digging holes on Earth, trying to figure out what exactly is located at extreme depths.

Throughout history, mankind has drilled holes in the ground for different reasons.

In this article, we take a look at some of the deepest holes on Earth.

Located in Belize, the Great Blue hole is a unique tourist attraction. The monstrous hole is actually a sinkhole located just off the coast of Belize. The Great Blue hole was recently explored and stretched around 984 feet across and is about 410 feet deep.

Located in Canada, the Diavik Mine is owned by the Dominion Diamond Corporation. The mine holds the title of being Canada’s largest diamond mine in terms of production. According to reports, the mine is 600 feet deep, is also one of the deepest holes in the world.

Another mine. Another Diamond Mine, and another Massive one at that. The Kimberly Diamond Mine. Located in South Africa, it holds the title as the world’s largest hand-dug hole. It was dug by around 50,000 miners. It was officially opened in 1871 and closed in 1914. The massive hole that resulted from the mine is nearly 800 feet deep.

You guessed it. Another Diamond Mine. This one is located in Russia and is one of the largest diamond mines opened in the time of the USSR. The mine is no longer in operation. It is more than 1,700 feet deep and has a diameter of around 3,900 feet. The Mirny Diamond Mine holds the title as the second largest hole excavated on Earth and the fourth deepest open pit mine.

The Chuquicamata Copper Mine

Located in Chile, the Mine, better known as Chuqui is believed to produce to most copper in the world. At around 2,800 feet deep, it’s one of the largest holes ever dug into the Earth.

Another massive copper mine. The Berkley pit in Montana is around 1700 feet deep. It was closed in 1982. Since then, the mine has been filled with more than 900 feet worth of groundwater and rainwater.

From Montana, we travel back to Russia to take a look at the Udachnaya Pipe Mine. Located in western Yakutia, the massive mine stretches 5,249 by 6,561 feet and it is 2,099 feet deep.

From man-made mines and holes, we return to those created by mother nature. Known as the door to hell, the Darzava Cater is a sinkhole that rightfully holds the title as one of the most unique holes in the world: its constantly on fire. Four decades ago, Soviet scientists set fire to gasses during a drilling project. Ever since the sinkhole has continued burning. It is around 230 feet wide and 100 feet deep.

We travel to Antarctica to see a massive hole that took more than seven years to drill. IceCube consists of spherical optical sensors called Digital Optical Modules (DOMs), each with a photomultiplier tube (PMT0) and a single-board data acquisition computer which sends digital data to the counting-house on the surface above the array. DOMs are deployed on strings of 60 modules each at depths between 1,450 to 2,450 meters into holes melted in the ice using a hot water drill.

Previous Post: Here’s What Would Happen If a Black Hole Entered Our Solar System

Next Post: Something Strange is Glowing at the Center of the Milky Way