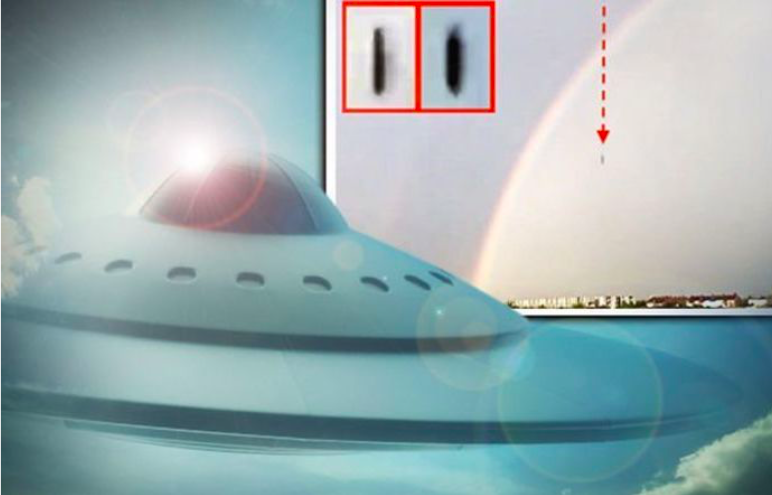 AN alien spacecraft has been filmed falling from the skies after being struck by lightning, a prominent UFO proponent has alleged.

“Seeing is believing” is the mantra for those offering-up evidence for extraterrestrial visitors using UFOs. And the latest proof of an alien spaceship exploring Earth has arrived today, according to wild online reports. For the shocking footage is said to show a UFO falling to the ground after being caught in a thunderstorm over England.

The UFO falls directly under the location of where lightning exploded

Waring wrote on his ufosightingsdaily.com blog: “In the video this dark UFO fell from the sky.

“It is very thin, yet compared to the buildings in the background, it is probably close to 30m long and 4m wide.

“The UFO falls directly under the location of where lightning exploded, so it appears that an object was struck by the lightning and fell.”

The alien technology conspiracy theorist then proceeds to outline why he believes the footage, shot in Somerset, England is shows a UFO employing curt-edge technology.

Waring wrote: “I believe this to be a UFO because only a UFO could be that big and have no wings.

“If the UFO was struck by lightning, then it may have temporarily lost 100 percent of its power and fell to earth.

“But as you see in the video, the UFO becomes invisible just before it hits the ground.

“That means the UFO regained its power just a split second before it crashed, so its cloaked was activated again and it took off.”

The footage was reportedly shot by Megan Taylor this month while she was filming a spectacular thunderstorm near Bridgwater in the county of Somerset.

And the clip is said to have been sent to the UFO proponent seeing something which left her “speechless” – a mysterious black object falling from the sky just after a lightning hit.

And the controversial footage, which quickly garnered thousands of YouTube, soon attracting scores of comments.

YouTuber Diego Giménez wrote: “Do not believe the lies of the elites who govern the world.”

But others were left apparently unconvinced by the footage, with Pedro Reina writing: “My mother, that is more false than democracy.”

Next Post: THIS AIR FORCE JOURNALIST ENTERS THE WRONG DOOR AT AREA 51