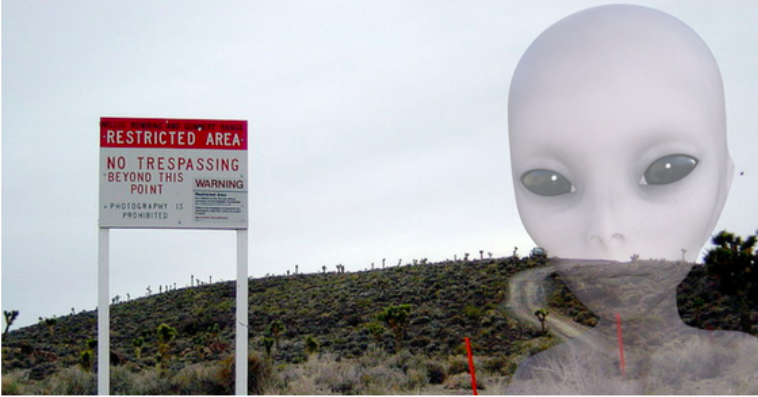 Every once in a while you hear a story that’s hard to believe. Sometimes the stories can be fact checked. Sometimes they cannot. The story you are going to read today is a real story and happend on the Area 51 property in Nevada.

Area 51 is the highly controversial area in Nevada that is “owned” by the Government. Who really owns the land though? The people who live on it. Not any one Government entity.

A friend years ago who was in the Air Force (not sure if he is anymore) shares the story:

A friend of his was a journalist in the air force and got clearance to visit Area 51 for journalism/reporting purposes.

The journalist was instructed to walk down a hallway and he would be met on the other end and be taken to a room to conduct his interview.

Out of curiosity (You gotta love those curious souls, don’t ya?) this journalist decided to take advantage of getting clearance into area 51 and figured he mine as well make the most of it. This could be his only opportunity to find some real answers.

Instead of going to the instructed area in area 51, because he was unattended and left to himself he decided to “explore” a bit in the meantime.

Air Force Journalist Let’s Curiosity Get The Best Of Him

He opened a door that led to a hallway that led to an open hangar type room. The moment he entered this large room he saw an alien body laid out on an operating table with humans probing around it.

Immediately he was shot with rubber bullets, bean bag gun and blacked out from the shock.

Once he was awakened the military informed him that he could not tell anyone what he saw.

He flew jets that cost 10’s of millions of dollars. He had no reason to lie. He was just passing in the story from one air force journalist to others that haven’t heard.

So, from one air force journalist, to a fighter pilot, to me, to you.

Aliens exist. Area 51 knows this. We have yet to be aware of what species they are in communication with. Or was this a UFO crash that caused them to be able to find this alien body? or was this an alien abduction? How did they get the alien in their control?

That is the real question.

Previous Post: UFO sighting: ‘UFO falls from sky’ during double rainbow after being ‘struck by lightning’