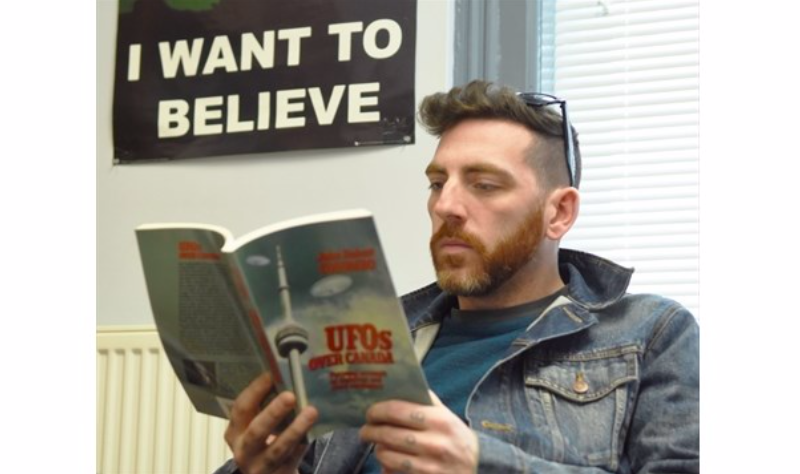 Matthew Hayes says Peterborough had two reported sightings between 1950 and 1995, but the government dismissed those accounts and many others across Canada

In January 1979, witnesses in Peterborough reported seeing a bright, oblong object in the sky over Rye Street slowly falling, “as if in slow motion.”

This lasted approximately four to 10 minutes, and although police were called, no solid answers were ever given to explain the unidentified flying object.

Is this evidence that life forms from another planet have come to Earth, and have these visitors touched down in Peterborough?

The chances are slim, says Matthew Hayes, a PhD student at Trent University who is wrapping up his five-year research project on the topic of UFOs.

Throughout the past few years Hayes has been researching 15,000 documents publicly shared by the Canadian government detailing its interactions with UFO sightings from 1950 to 1995.

The archive is made up of sighting reports, interdepartmental memos and other documents between bureaucrats.

Hayes says he discovered the archive by accident a few years ago when he was Googling supernatural topics — something he’s passionate about.

“I’ve always just kind of had an interest in the paranormal, UFOs, sasquatch,” he says.

Reviewing the documents, he determined there was enough information to turn it into a serious research project.

Hayes’s project has received national attention. He’s been a guest on various podcasts to talk about the topic, and he’s been interviewed by CBC on multiple occasions.

But Hayes’s project isn’t focused on whether the government was investigating the existence of alien life. Instead, it’s a socio-political study about the conflict between citizens and the government in an uncertain postwar period.

The main argument of his project “almost has nothing to do with UFOs,” he says.

“Canadians didn’t know what their identity was, and they were trying to find what Canadians can and should be.”

The conversations regarding the existence of UFOs at the time were a way of understanding how people and the state were in conflict.

“From the very beginning, I think, the Canadian government was really skeptical about this,” he says.

Many of the reports, in which citizens say they witnessed unidentified objects or lights in the sky, were dismissed. People usually didn’t have the knowledge to know they were looking at stars or other planets and assumed they were observing aliens.

The government “just assumed people were delusional or had seen something they didn’t,” Hayes says.

Across 15,000 documents, there were only three cases where physical evidence was available. A man in Manitoba claimed to have been burned by a UFO, and radiation readings at his property showed higher levels of radiation than normal.

“Vegetation had been burned as if something had descended or landed,” Hayes says.

But what about Peterborough? Could the city be a cosmic gateway to intergalactic life?

Hayes says the archives have only two sightings from between 1950 and 1995. Although there may have been more, some sightings may never have been reported, documents could be missing or some could have been destroyed, as is standard-operating procedure after so many years.

The first documented sighting was in 1967. Four amateur astronomers reported seeing a 50-foot-long aircraft in the sky and heading east.

The craft appeared to be going about 100 miles per hour (160 km/h) and disappeared after a few minutes.

The other instance of a reported UFO sighting was in 1979. As previously mentioned, witnesses reported seeing a slowly falling object in the sky that lasted up to 10 minutes before it disappeared.

Whether these reported sightings reveal the existence of alien life or technology is unconfirmed, although Hayes doesn’t think so. But that doesn’t mean he doesn’t think other life doesn’t exist in the universe.

“I would find it absurd if life didn’t exist elsewhere,” he says.

But after reading through thousands of documents and different narratives of these events, he’s not convinced anything in the archive definitively shows UFOs have visited Peterborough or the rest of Canada.

“I haven’t seen anything that convinces me of that, and I still consider myself as pretty open-minded,” Hayes says.

The reports in the archive show that the government was skeptical of the existence of alien life as reported in these sightings, and that it put emphasis on the reliability of “ground-level observers.”

Documents seem to show the government had much skepticism about so-called witnesses and believed they didn’t understand they were seeing natural phenomena.

“I believe that, to an extent,” says Hayes.

Aliens and UFOs are a topic people constantly return to, explains Hayes, because, despite scientists saying they’re not real, the public continues to make its own observations that perpetuate the conversation.

And his project has focused more on how those two voices — citizens and the government — have interacted and clashed over decades when it comes to these mysterious sightings.

The project is “about what kind of knowledge we actually obtain from these observations” in the archived documents, Hayes says.

Hayes plans to publish his research in a book, after his project is completed in August.

Previous Post: ‘I can confirm I’m not mad’ – Bristol man claims to have captured pictures of a UFO above his garden

Next Post: UFO sighting: ‘UFO falls from sky’ during double rainbow after being ‘struck by lightning’