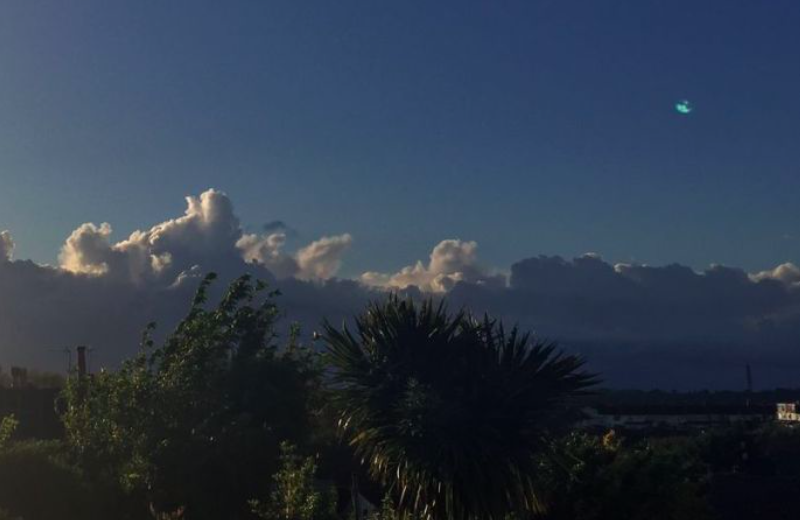 “It was not a balloon, and was definitely not just light refraction through my lens.”

We’ve all been there – one moment you’re enjoying a spot of late sun in your back garden, and the next you’re watching an Unidentified Flying Object make its way over the city.

At least, that’s what one man – identified only as Eliot – purports to have seen on Thursday evening (April 25), whilst standing in his garden in St George.

He got in touch with Bristol Live on Friday in order to share the pictures of what appears to be a suspicious green glow floating through the clouds and across the clear blue sky.

“There were three of us in the garden, so I can confirm I’m not mad,” Elliot said, regarding his sighting of what he believes to be mysterious visitors from another planet.

Unfortunately our extraterrestrial correspondent hasn’t been available to comment on the likelihood of this being a genuine encounter of the third kind – but here’s what Elliot had to say about his unusual sighting.

He said: “We watched an object in the distance moving in strange directions at hight speed, occasionally gleaming with light. It seemed strange, but we didn’t make anything more of it.

“A few minutes later I got my phone out to capture a strange ray of light piercing through the cloud. I wasn’t aware until afterwards that the object had some how made it’s way back around (probably a mile or so from where we first saw it) and then featured in the photos that I took.

“I did not realise I’d documented it until after. It was flying very low, moved silently and in an unusual fashion. It was not a balloon, and was definitely not just light refraction through my lens.”

It’s far from the first time Bristol residents have reported coming into contact with something from another galaxy altogether – from an ‘unusual saucer shaped object’ to ‘a disk object which descended above the houses’ it seems as though Elliot is not alone.

Previous Post: 15 Facts About UFOs That Will Blow Your Mind

Next Post: Have UFOs visited Peterborough? Reports of sightings go back decades