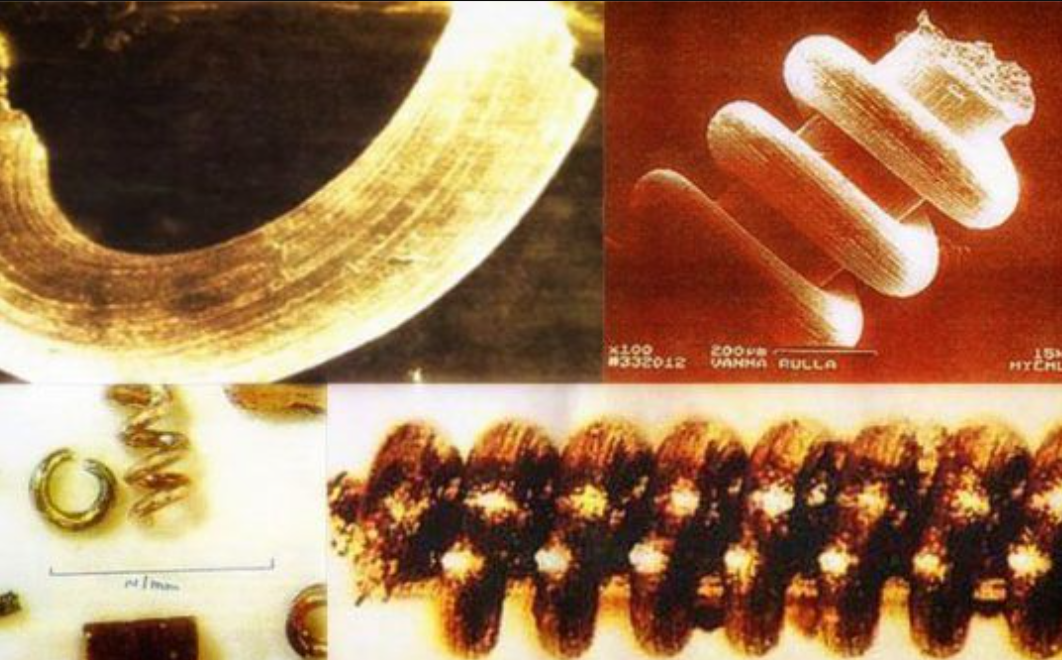 Something as delicate and intricate as nanotechnology couldn’t have been developed without first discovering the structure of atoms and inventing the microscope. But these are all recent advancements, leading us to wonder who in the seven skies built these microscopic ooparts some 300,000 years ago?

An out of place artifact (oopart) is the name given to a prehistoric object found in an unusual or impossible context. Ooparts are usually described as objects created with technology far too advanced for the level of civilization characteristic to the era to which they have been dated. Many view ooparts as evidence that mainstream science is omitting important areas of knowledge, either willfully or through ignorance.

In 1991, researchers performing geological surveys on several Russian river banks discovered hundreds of tiny coil-shaped artifacts, some as small as 1/10,000th of an inch. The researchers were doing mineralogical studies for gold prospecting in the Ural mountains and one can imagine their bafflement at the discovery.

The largest ones measure 1.18 inches (3 centimeters) in length while the smallest are only 2.5 microns long. For comparison, the average strand of hair is about 100 microns wide. The larger coils are made from copper while the smaller ones are made from tungsten, molybdenum, or an ally containing both metals.

Their shape strongly suggests they are not naturally occurring metal fragments and they actually resemble modern nanotechnology components. Moreover, it would seem that the nano-coils exhibit Golden Ratio proportions, lending credence to the idea that they were intelligently-made by mathematically-wise beings.

These ooparts have sparked a heated debate that continues to this day. The mysterious microscopic structures have been dated at 300,000 years old. Was Earth home to a technologically advanced society at the time or are these artifacts evidence of some other intelligence headquartered on our planet?

Our current society has developed nanotechnology only recently due to numerous and well-known limitations. Mainstream science does not accept a technological level beyond the occasional use of fire for humans that inhabited the Earth 300 millennia ago. Scientists were not able to determine who or what produced these particular structures but one thing is certain: they must be the result of a technological procedure since no known natural process is able to produce such items.

Some have speculated the structures are simply debris from the nearby rocket test facility of Plesetsk but a report from the Moscow Institute of Technology has concluded that their old age is enough to dismiss this claim.

Studies performed by facilities in Helsinki, Moscow and St. Petersburg have also backed up the claims that the coil-shaped objects are manufactured and indeed very old and predate modern history by orders of magnitude. Unfortunately, since the nanospirals’ principal investigator, Dr. Johannes Fiebag died in 1999, research was halted and the ooparts’ whereabouts are currently unknown.

This finding raises many questions. Were humans able to comprehend nanotechnology in the Pleistocene era? At the time of Homo erectus and mastodons, who mastered such advanced industrial science? Was Earth home to a long-lost civilization or are these artifacts remnants of alien visitors?

Previous Post: 2,000 Year-Old Book of Giants Describes How the Nephilim Were Wiped Out