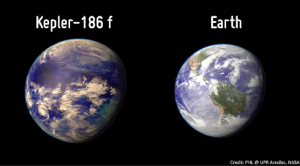 Astronomers have discovered a planet nearly the same size as Earth that orbits in its star’s habitable zone, where liquid water could exist on its surface, a new study said.

The presence of liquid water also indicates the planet could support life.

This newly found world, Kepler-1649c, is 300 light-years away from Earth and orbits a star that is about one-fourth the size of our sun.

What’s exciting is that out of all the 2,000 plus exoplanets that have been discovered using observations from the Kepler Space Telescope, this world is most similar to Earth both in size and estimated temperature, NASA said.

An exoplanet is a planet that’s outside of our solar system. 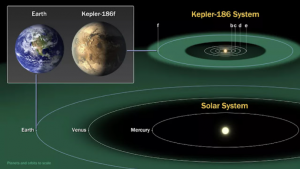 “This intriguing, distant world gives us even greater hope that a second Earth lies among the stars, waiting to be found,” said Thomas Zurbuchen, associate administrator of NASA’s science mission directorate in Washington, D.C.

This newly revealed world is only 1.06 times larger than our own planet. Also, the amount of starlight it receives from its host star is 75% of the amount of light Earth receives from our sun – meaning the exoplanet’s temperature may be similar to our planet’s, as well.

But unlike Earth, it orbits a red dwarf. Though none have been observed in this system, this type of star is known for stellar flare-ups that may make a planet’s environment challenging for any potential life.

Scientists discovered this planet when looking through old observations from the Kepler Space Telescope, which the agency retired in 2018. (Although NASA’s Kepler mission ended in 2018 when it ran out of fuel, scientists are still making discoveries as they continue to examine the information that Kepler sent back to Earth.)

“The more data we get, the more signs we see pointing to the notion that potentially habitable and Earth-size exoplanets are common around these kinds of stars,” said study lead author Andrew Vanderburg, a researcher at the University of Texas at Austin.

“With red dwarfs almost everywhere around our galaxy, and these small, potentially habitable and rocky planets around them, the chance one of them isn’t too different than our Earth looks a bit brighter,” he said.

Previous Post: At The Age of 95, Betty White Revealed Her Secret To Staying Young

Next Post: Walmart Is In Big Trouble After A Photo Of Their Latest Display Has Gone Viral