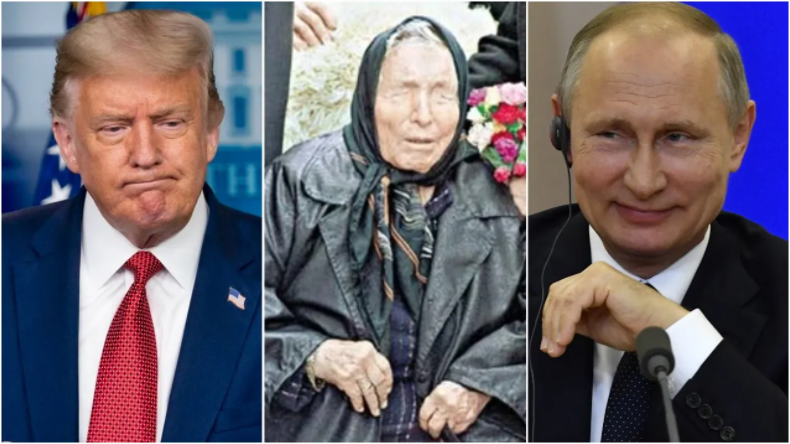 Blind mystic Baba Vanga made some ominous predictions about Russian President Vladimir Putin before her death.

The Bulgarian mystic, dubbed the ‘Nostradamus of the Balkans’, is widely regarded for her prophecies which many say have been fairly accurate for the past two decades – despite the fact that she passed away 24 years ago.

Baba Vanga is said to have predicted the 9/11 terrorist attack on the World Trade Centre in New York, the Chernobyl tragedy in Ukraine and Brexit

She lost her sight at the age of 12 and during her lifetime she is said to have developed powers of clairvoyance and people would seek her out to contact dead relatives and loved ones.

Although she made many predictions during her life, Baba Vanga rose to international prominence four years after her death when the Russian nuclear submarine Kursk sank in 2000. She had predicted Kursk would be flooded but at the time many believed she spoke of the city Kursk in western Russia.

And throughout her lifetime she made a number of predictions about Russian President Vladimir Putin, who last week launched a brutal and unprovoked war on Ukraine and its people.

Among her predictions Baba Vanga is said to have prophesied that evil Putin would one day rule the world, and that Europe would become a “wasteland”.

But she also predicted that he could be assassinated in an attempt made from within the Kremlin – the citadel of Moscow home to the government of Russia.

Baba Vanga had told writer Valentin Sidorov that Russia would become the “lord of the world”.

“All will thaw, as if ice, only one remain untouched – Vladimir’s glory, the glory of Russia,” Baba Vanga had predicted, adding: “Too much it is brought in a victim. Nobody can stop Russia.”

For the year 2021, she predicted “difficult times” saying a “strong dragon” would grip humanity and that a cure for cancer could happen. She also claimed Putin would be the target of an assassination attempt made from within the Kremlin.

It is said that her predictions look forward to 5079 – the year she believed the universe will end. For the year 2022, she has envisaged natural disasters, a water crisis and an alien invasion.

Previous Post: 82-Year Old Woman With Dementia Gets Her Memory Back After Changing Her Diet

Next Post: He Refuses Chemoterapy, Lived More Than His Doctors and Today He Is 102 Years Old. This Man Has Finally Revealed The Cure For Cancer!