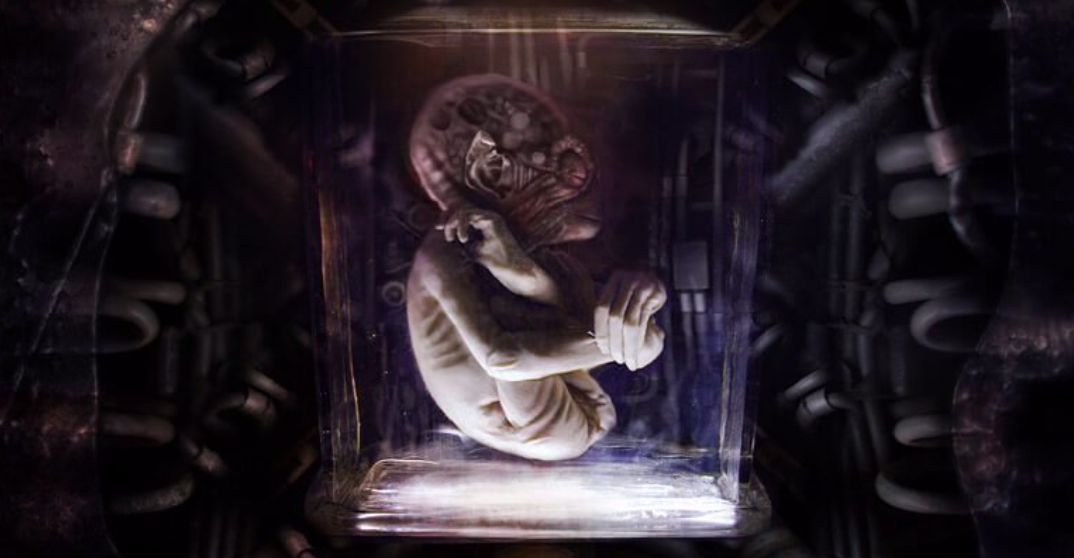 Thirteen years ago, a group of Chinese researchers located and explored an ancient structure so unusual that an extraterrestrial hypothesis was promptly taken into consideration.

The fascinating ruins were discovered in the remote wilderness that makes up most of the intersection between China’s Qinghai province and the Tibetan Autonomous Prefecture. Throughout history, humans have seldom settled in this harsh and inhospitable area. Only occasionally, migrant herdsmen pass through the mountainous regions to the north.

No industrial facilities can be found in the zone, much less the remnants of civilizations with advanced metalworking capabilities.

Despite this, atop a rocky ridge called Mt Baigong lies a pyramid-shaped ruin with three triangular entrances. Two of them are collapsed but the remaining one leads into an artificially-dug cave going deep into the heart of the mountain. Embedded in the cave walls and floor are hundreds of ancient metal pipes, arranged in what appears to have been a sophisticated network of unknown purpose and origin.

The rusted pipes range from toothpick-sized to 1.5 feet in diameter and connect the cave to nearby Toson Hu, a saltwater lake 300 feet away. On the northern shore of Lake Toson, erosion exposed hundreds more of these archaic ducts. This detail led researchers into believing whoever built the pipework either used it as a drainage system or as a way to pump saltwater from the lake.

Baffled by the complexity of the network of pipes, the researchers took samples of the strange metallic tubes to the Beijing Institute of Geology for analysis. That’s when they had their biggest surprise.

Making use of a process called thermoluminescence dating, the scientists were able to analyze the pipes’ crystalline structure and determined they had been subjected to extreme heat approximately 140-150,000 years ago. In other words, the pipes had been smelted long before humans started dabbling in metalworking. An advanced civilization building complex structures 145,000 before us? Could it have been alien? The chemical analysis revealed even stranger details. The pipes had been smelted using a strange alloy composed of 92% common metals and minerals like ferric oxide, silicon dioxide and calcium oxide but it also contained 8% unknown materials. This intriguing aspect did not prove the pipes were out of this world but it did pave the way for speculation.

Unable to identify the exotic 8 percent, researchers turned to the remaining constituents and discovered another puzzling aspect: the pipes contained a proportion of silica that is specific to Mars.

The news fell like a bomb, the story quickly went viral and people started flocking to Mt Baigong to gawk at the anomalous artifacts. They even erected a monument with a satellite dish on top, a direct reference to the efforts to contact extraterrestrial civilizations. As a consequence, the Chinese Government closed off the area and posted guards at the entrance to the cave. This attitude is highly suspicious, to say the least.

Skeptics say the Baigong pipes are nothing more than fossilized tree roots that somehow got lodged in sediment, hardening over the years and eventually becoming the unusual structures that stumped everyone. If this is the case, why would the authorities step in and have the military guard the site?

This situation led conspiracy theorists to believe Mt Baigong was once visited by an advanced extraterrestrial race, possibly originating from Mars. For whatever reason, they constructed an artificial pyramid on top of the mountain, housing what appears to have been a laboratory. This theory is intriguing for a number of reasons.

The entire area surrounding the mountain consists of wide expanses of flat terrain that would have been an ideal landing site for large spacecraft. The mountaintop makes for a perfect vantage point one could use to oversee landings and takeoffs.

Recently, mineral explorations have shown the area contains various ore deposits. Any industrious civilization, no matter how advanced, could see the utility of extracting and managing these resources. In order to do so, they would have needed some type of energy source and that is where the pipes’ purpose might become obvious.

The Chinese scientists wondered why the pipes went into saltwater when another freshwater lake was even closer to the pyramid. Why the need for water containing a greater percentage of sodium chloride? Let’s examine some of our own activities and perhaps we can find an answer.

Modern chemistry and manufacturing makes use of a process called electrolysis, which basically requires passing an electric current through a solution or a molten substance. This triggers a chemical reaction which allows for the separation of materials. When water undergoes electrolysis, it breaks down into hydrogen and oxygen but this only works when saltwater is used. And it’s worth noting that a mixture of liquid hydrogen and liquid oxygen is commonly used as rocket fuel.

Admittedly, this is all speculation but when combined, the totality of the details start painting a clear picture for the open-minded:

This scenario seems all too familiar to overlook.

Naturally, some have claimed the Baigong pipes are nothing more than a hoax. Unfortunately, this proposition seems to ignore the facts. The Chinese Government is well-known for its attitude towards those who sabotage the country’s image in the eyes of the rest of the world. It would have taken measures to punish those responsible for spreading false information rather than occupying the ancient pyramid.

Whatever the truth behind this perplexing discovery might be, one thing is certain: it doesn’t seem to fit in any of our traditional textbooks.

Next Post: NUMERIC SYMBOL FOUND ON BOTH THE MOON AND MARS