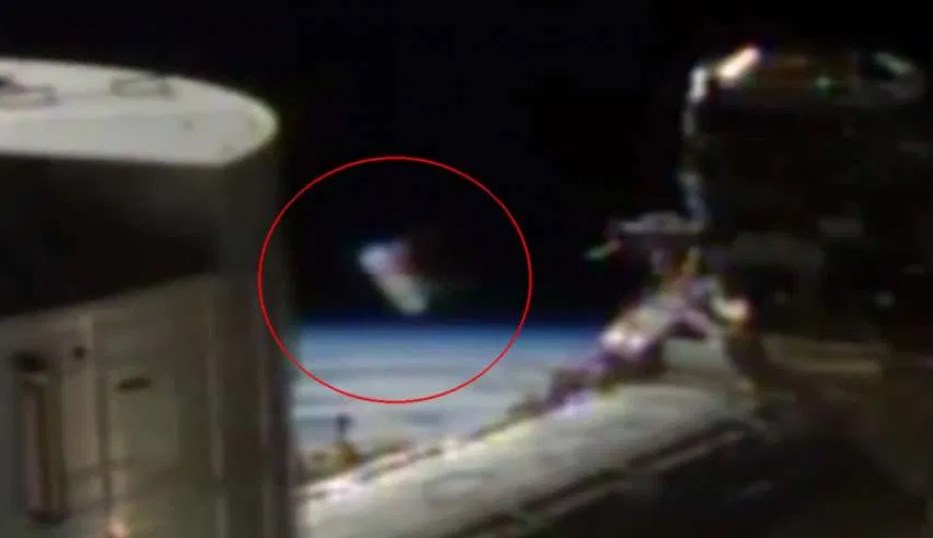 That in the live videos of the International Space Station (ISS) appear strange objects passing near the Earth is nothing new. We could see it last month, where a video showed what appeared to be a bright light floating above the Earth . Even NASA was forced to make an official statement after Italian astronaut Samantha Cristoforetti published a video in which several UFOs could be seen passing behind an ISS window. A spokesman for the US space agency said it was simply a reflection in the window.

But if this is strange, what would you think if you saw a cylindrical UFO near the International Space Station? As this is what has happened, a strange elongated object has appeared suddenly in front of one of the ISS cameras before approaching and fading. Experts in the matter believe that it is an alien spacecraft using a camouflage device, thus ruling out that it is space junk.

The cylinder-shaped UFO near the ISS

A strange cylindrical UFO has been captured during the live transmission of one of the cameras of the International Space Station , according to the British newspaper Daily Mail . Both conspiracy theorists and ufologists believe the images show that aliens have developed camouflage technology.

The video shows how an object suddenly appears near the space station, before it starts to approach. Then part of the cylinder is disappearing , so it seems to be evidence that the UFO uses camouflage technology. Popular ufologist Scott C. Waring explained in his UFO Sightings Daily blog that the darkness in space makes it a safe place for exotic species that may not be so friendly. And he mentioned Bob Lazar, an alleged physicist working in a military zone called S-4 (Sector Four), near Groom Lake, Nevada, who issued documents saying that the United States Air Force knew 56 species of aliens .

“I saw a UFO in the distance that was getting closer to the space station,” Waring wrote in an entry of his blog. “The UFO was partially covered up, which made it look transparent. In the deep darkness of space, mixing in the environment means you will be more certain of other exotic species that may not be so friendly. Bob Lazar said that in Sector Four he read documents saying that the United States Air Force knew 56 species of aliens.

The video, which was uploaded to YouTube on April 19, 2017 by Waring, has caught the attention of major media and alternative news blogs. However, the UFO expert and author of the UFO Research Manual Nigel Watson has another explanation for the strange cylinder. He thinks it’s a satellite or space junk relatively close to the camera. And it questions the theory of the extraterrestrial ship since if it were so could not be seen so easily.

“If an extraterrestrial spacecraft passes near the ISS with its camouflage technology then it is not very reliable to say, as they continue to appear and disappear, ” Watson told the Daily Mail. “One would think that for now they could easily avoid our cameras And other detection technologies. This last video seems to show a satellite, or a piece of space junk that is relatively close to the camera. Instead of camouflage technology it is likely to be a reflection of the sunlight. ”

But this is not the first time strange objects have appeared near the International Space Station. Over the past year, there has been a growing number of sightings of unidentified objects in front of the cameras being broadcast live from the ISS, even some have provoked a real media flare.

While it is not always possible to determine exactly the origin of these objects due to the brief period in which they appear, skeptics offer a number of possible explanations for this type of sightings such as reflections on the camera lens, light changes, space debris, Satellites, and even small paint spots or dust particles that can be similar to UFOs when they are reflected by the bright light of the Sun.

This is the explanation of the skeptics, but what do you believe? Is a UFO of extraterrestrial origin in cylinder form? Or do you have another explanation?

Previous Post: A 13,000 years old Alien Mummy discovered by the KGB in Egypt

Next Post: NASA Images Show Mysterious Waves In The Clouds Over Antarctica