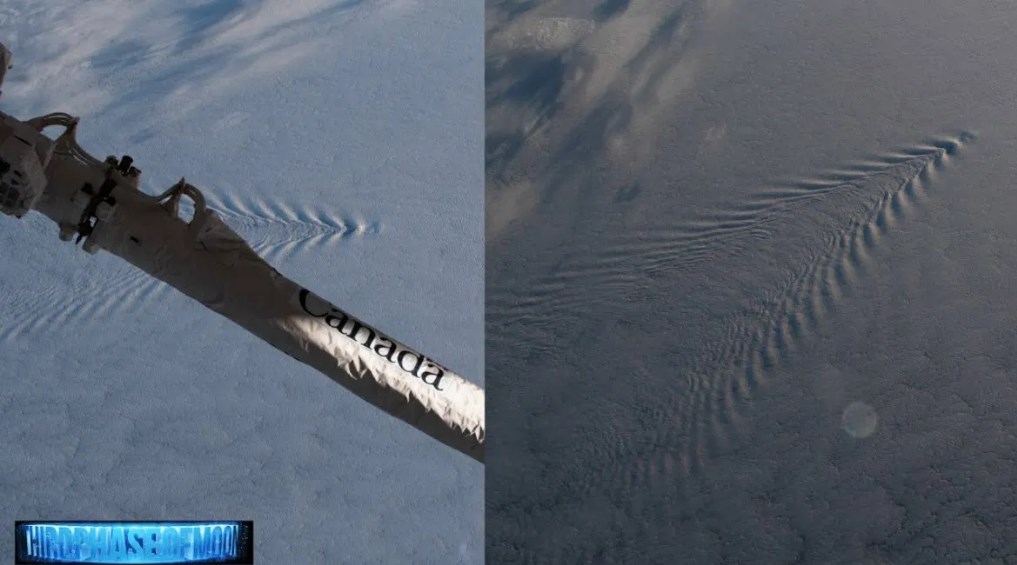 Loading...
Cameras on the International Space Station have reportedly captured images of soundwaves travelling across Earth at high speeds, believed by some people to be a new form of ‘space technology’.

The photos were captured by NASA above the Atlantic ocean, and, from space, show a particularly strange cloud formation that looks uncannily like it may have been created by some unidentified flying object, or even a ‘secret sonic weapon’.

The ‘ripples’ in the clouds trail off for miles, and while they could well be an unusual weather event creating a pleasing pattern in the clouds, it’s not hard to believe it was man (or alien) made.

The images were spotted on the NASA website by Blake and Brett Cousins, who regularly post space-related content on their YouTube channel thirdphaseofmoon. The photos were apparently captured earlier this month, as the ISS was around 226 nautical miles above the Earth.

As the conspiracy theorists ponder what created the strange pattern – whether it’s a ‘craft zipping through the clouds’ or soundwaves from a ‘secret sonic weapon’ – both YouTubers conclude ‘whatever it is, it’s massive.’

Blake and Brett also discuss how it’s more than a little coincidental the ISS just happened to be in the perfect spot above the Earth to capture such photographs. As Blake says: ‘What’s amazing to me is that NASA and the ISS were in the exact spot at the right time to capture this, I think this was an experiment.’

You can watch their video here:

Discussing the photos, the brothers suggest the photos may reveal NASA working on ‘new space technology’, with the ISS deliberately taking ‘super hi-res’ photos of the event.

Naturally, the video attracted a whole host of comments from fellow theorists, who also suggested the pattern was created by UFOs, NASA themselves, weather control experiments and and even, jokingly, a ‘hyper fast invincible alien speedboat in the sky.’

Its possible the space station is aiming a beam down at the clouds as it circles earth and photographing the results at the same time, that explains how they happened to be at the right spot, they are testing a space based Particle weapon or something to do with weather controll! [sic]

It looks like a bow-shock from a craft breaking the sound barrier.

The evidence is clear; sound frequency waves that is clearly being tested while the ISS observes its projectory and affects

UFO? Sonic waves? Meteorite? The tip of a mountain poking above the clouds to make them move? Wonder what the Flat Earthers will say about this…

Previous Post: Buzz Aldrin: On the Moon We Were Ordered by Aliens To Move Away!