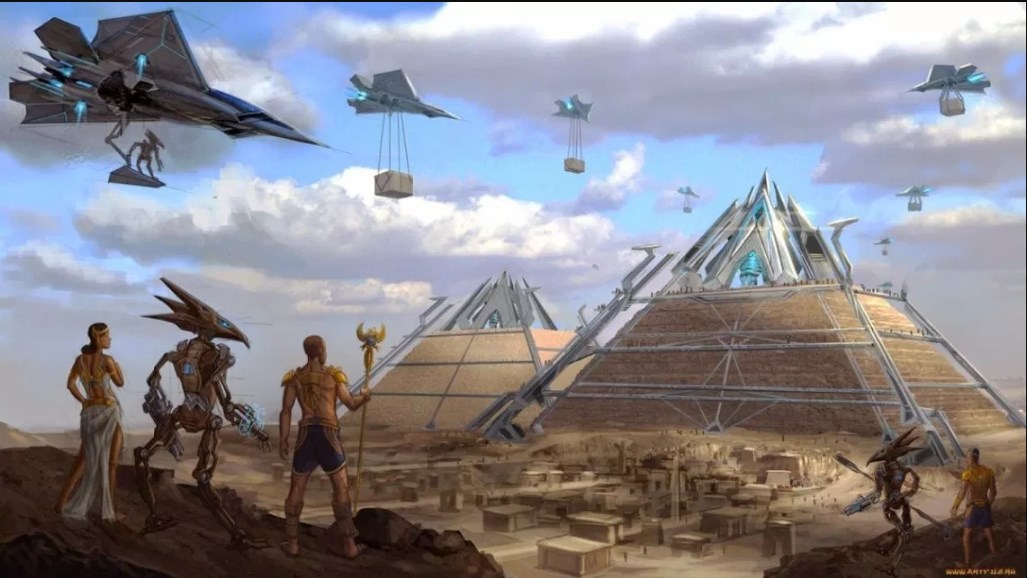 After analyzing many ancient manuscripts, one can conclude that the Ra god of ancient Egypt was extraterrestrial; and we do not refer to the famous movie “Star Gate” in which they make it appear that the god Ra was an alien wandering through space in search of eternal youth.(RA)

In the analysis of the ancient Egyptian scriptures, myths and legend about this primordial Egyptian god, everything seems to indicate that Ra, if it had existed at some remote time in history, had to come from another world, so it was alien. In addition, there is also the belief that Ra might have been a survivor of Atlantis.(RA)

It emerges from the Primordial Ocean and assumes the name of Ra becoming the only god creator of the gods, without the aid of another entity. With his own members he begat Shu and Tefnut, of whom were born Geb and Nut, who in turn begot Isis, Osiris, Seth and Nephtis. Assuming a cosmic character of the predynastic astral age, which based its doctrine on the stars, Ra became a solar god, symbol of the aristocratic religion of the earliest period, in opposition to the more democratic and popular cult of Osiris.(RA)

The god reigned for many years over Egypt, but disillusioned with his mythical earthly kingdom and disgusted by the betrayal of those who had benefited from his wisdom, Ra decided to leave Earth and go up to heaven to punish the human race. For his celestial voyage the god used a day boat, Mantz, and another night, Mashkhet, on which the god traveled the infernal regions. From heaven the god sent to Earth his divine Eye which, assuming the appearance of the goddess Hathor, the leonine aspect, exterminated much of humanity gaining the epithet of Sachme, the Mighty.(RA)

In late epoch Ra was associated with the divinities Amon, Aton, Khnum, Sebek. In the form of Amun-Ra the god became the supreme divinity of the whole Egyptian religion. With the triple form of Khepri-Ra-Aton he synthesized the three aspects of the sun; Khepri, the uprising; Ra, at noon; Aton, the west, synthesis that had a special cult in Heliópolis, where the anthropomorphic god is represented with the head of falcon or ram crowned by the solar disc. In the Book of the Dead, Ra assumes the appearance of an armed cat with a knife that kills a serpent, demonic symbol that Ra annihilates. The god was attributed some women, including Rait, female counterpart of his name and Uert-Hekeu (Iusas).(RA)

Legend has it that at first there was no light. There was only darkness and a great expanse of water with the name of Num. Nun’s power was so great that from the interior of the penumbra he sprouted a large and bright egg. And out of that egg came Ra.(RA)

One of the reasons why Ra was considered indestructible was because nobody knew his name. This belief was assimilated by several religions, including Judaism and Islam, who call their god in multiple forms but establish that their definitive name is unknown and whose knowledge will predict the end of time.(RA)

If we relate these texts we could be talking about that the RA god of ancient Egypt, apparently had to come from outer space, To arise from a sea called Num in an egg could be the way the ancient inhabitants could describe a capsule or starry spaceship in the sea, and not knowing the true name of this ancient god makes mysteriously think of its possible origin from outer space. Among the most deeply rooted theories about the origin of RA is that of extraterrestrial origin, it is the one that has the most force.(RA)

Previous Post: A “Flying Humanoid” About Phoenix, USA Unleashes the Controversy on the Internet (Video)

Next Post: NASA records again a large cube shaped UFO next to the Sun (Video)