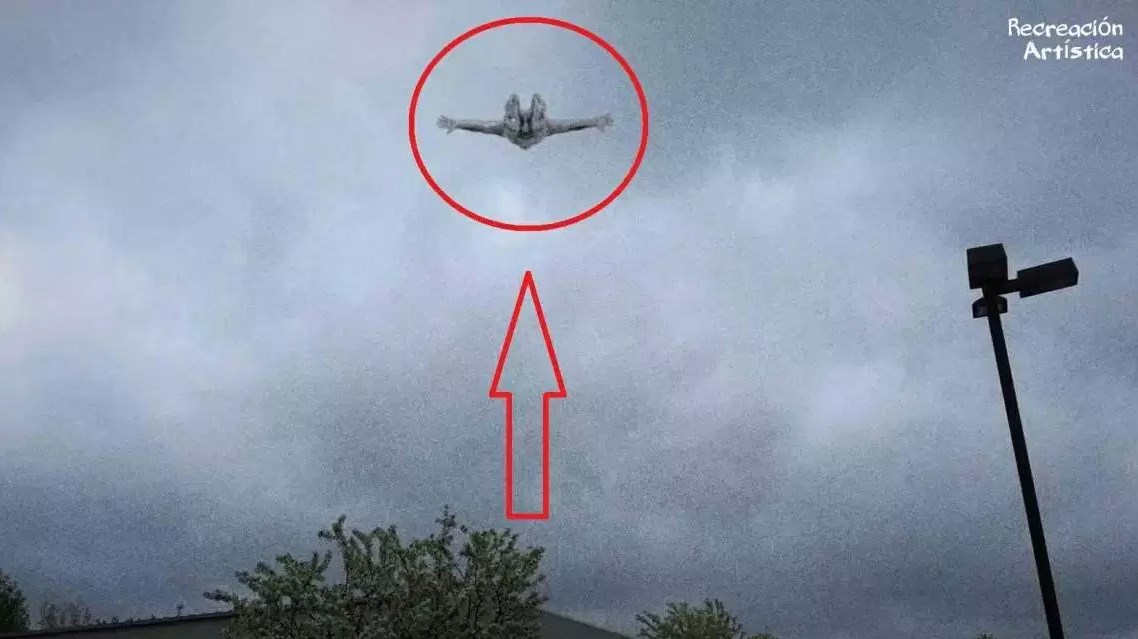 According to several UFO theorists, a brief clip sent to the Mutual UFO Network (MUFON) shows a “flying humanoid” dressed in a space suit over Phoenix in Arizona. The “alien” would seem to be landing from space. (See video below)

According to an anonymous witness in a report filed in the Mutual UFO Network database (MUFON) as Case 75606 , the sighting occurred while riding a mountain bike on Javelina Trail, South Mountain in Phoenix, Arizona, on April 2 of 2016. At about 7 pm, the witness noticed a mysterious and solitary object floating in the sky. The object seemed so unusual that the witness was forced to stop riding a bicycle, disassemble and film the object.

What caught the attention of the witnesses at the beginning was the size of the mysterious UFO. It appeared to be a large, heavy and solid object, shaped like a vertical cylinder with appendages hanging from the lower end. The UFO floated in the sky on an easterly course, losing altitude as it went.

The witness observed the mysterious UFO for about a minute, during which he took a photo and filmed a fifteen-second video. Then he cycled down further down the road to secure a position that offered a better view of the mysterious UFO. When he was satisfied that he had found a better position from which to see the UFO, he observed it and filmed it for another minute.

Eventually he lost sight of the object after seeing it continuously for about a minute. The witness expressed regret that he could not locate the place where the UFO finally landed. He said he was hampered by the fact that it was twilight. By the time the object disappeared beyond the horizon, visibility had greatly diminished.

But he estimated that he saw the object from a distance of approximately 2 miles and that its height was approximately 30-50 feet. It seemed to have been drifting in the air near Sky Harbor Airport in Phoenix.

The witness ruled out suggestions that the UFO could have been a hot air balloon because “it was unusual for a hot air balloon” to fly so close to a major airport. He also dismissed suggestions that it was an unmanned aircraft, in part because drones were not allowed to fly near airports and partly because it did not look like a drone or an inflated hot air balloon. Although he admitted that the UFO might have been a deflated balloon, he argued that a deflated balloon would have crashed faster instead of slowly and slowly drifting to ground level.

“It was moving too slow to be a forced landing balloon.” There was no movement from the top, as a deflated balloon could have done. “

He also observed that, unlike a balloon, it appeared compact and solid with “well-formed and defined edges” . Another remarkable aspect of the mysterious UFO were the appendages that hung from the bottom. The recording has gone viral in the UFO forums with many enthusiasts debating its nature. UFO journalist Scott C. Waring suggested that the UFO was a “flying alien”.

“The UFO seems to be a permanent figure , “ commented the notorious blogger in his strange blog UFO Sightings Daily. “Flying extraterrestrials have been seen in previous documents, but this is one of the first that I have seen recorded . “

Waring expressed regret over the fact that the witness could not film the UFO any longer to reveal how it moves. Despite the distance that prevented the camera of the witnesses from focusing for a clearer view, Waring supposed that it was very likely that an alien entity would fall from space.

“I really wish I had shot a few more minutes before closing his video so we could see how he moves,” he continued. “His movement would be key to identifying him as an entity . “

Waring’s images and comments triggered a discussion on his blog. One enthusiast suggested that the object resembled the satellite called “dark knight,” but Waring disagreed. Another enthusiast agreed with Waring that he looked like a “humanoid ufo”.

A skeptic suggested that it was a hoax. According to the skeptic, it could have been a fixed kite to a drone. “I think this is a fake video , ” he said. “I think this is a kite tail well above a drone . ” But other bloggers ignored what seemed like a reasonable suggestion. The reports of “humanoids” have become viral in the UFO community, although some observers dismiss it as a hoax, many UFO hunters and enthusiasts think it is real.

Some conspiracy theorists suggested it was a three-dimensional projection designed to test the Blue Beam Project, a supposed plan by world governments to inaugurate the exceptionally evil New World Order (NWO) by simulating the second coming of Jesus to deceive millions of Christians. crossing the globe. In addition, many of these theorists believe that the implementation of the Blue Beam Project is imminent after recent major advances in holographic imaging technology, such as Project Nimbus. What do you think?

Previous Post: The Phenomenon of Lazaro, People Who Were Resurrected After Being Declared Dead!

Next Post: Old manuscripts confirm that RA was an Extraterrestrial God of Egypt