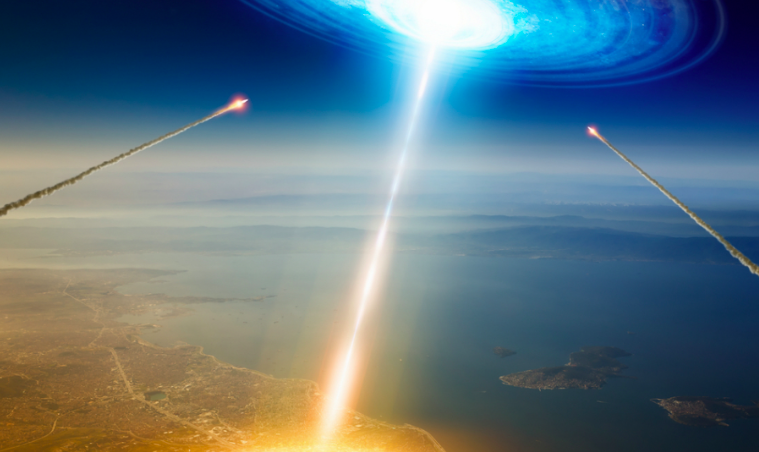 Paul Hellyer, Ex-Canadian Defense Minister, now a whistle-blower and Alien Truth Seeker has now confirmed that the US not only traded technology with aliens for years, but even possesses technology capable of shooting down extraterrestrial spaceships.  Could this explain some of the strange expositions being seen in the skies above us?

He has recently confirmed that the United States has developed technology capable of downing alien spaceships, says Hellyer, who is 94-year old Canadian engineer, politician, writer, commentator and alien conspiracy theorist – a brave man too many truth seekers!

“I do believe they have developed two or three kinds of weapons that are capable of disabling and bringing down UFOs,” he told the Daily Star newspaper.

“That is the primary purpose of the anti-ballistic missile shield, the weapons are ones that can be aimed in either direction to control the situation on Earth but equally, if not more important, to shoot down UFOs,” he told the British paper.

I guess what makes this claim incredibly important is the fact that Hellyer was once minister of national defense of Canada from 1963 to 1967 and minister of transport from 1967 to 1969.

It was back in 2014, when Hellyer told RT that there are at least four different alien species that have visited Earth for thousands of years. Some of them are actually interacting with the US military at an Air Force base in Nevada. According to Hellyer, the US military have been exchanging technology with “Tall Whites,” as he describes the alien race, since the 1960s. Please check out below our previous important article important article on this.

Paul believes that our vast advances in technology over the last so many years has gained attention off at least another 80 different Alien species! The Former Minister believes that the leaders of planet earth now use technology which is like a ‘Cosmic Beacon’ for the ET’s our there!

“There are about 80 different species and some of them look just like us and they could walk down the street and you wouldn’t know if you walked past one. They are what we call ‘Nordic blondes’ and also the Tall Whites who were actually working with the US Air Force in Nevada. ”Then there’s the Short Greys as they are called, and they are the ones you see in most of the cartoons, they have very-very slim arms and legs, they are very short, just a little over 5 feet, and they have a great big head and great big brown eyes.” Replied Hellyer.

According to the Daily Star newspaper, he cited former US Air Force serviceman Charles James Hall, who has written about his alleged encounters with aliens at a Nevada base, as having told Hellyer they had a hangar for a “mother ship that came into the side of a mountain on the nights of a full moon.”

However, despite having weapons capable of shooting down a UFO, there is no need to do that, as the aliens are actually friendly and are more concerned about the way humans treat their planet. Paul went on to say:

“They are friendly, most observers believe, so why would we shoot at friends?” he asked.

It is very possible that the US government has NEVER shot down a UFO and they wouldn’t be that stupid, as Hellyer said in 2013 in another interview for RT, that would spark an “interstellar war.” He went on to say:

“It’s a possibility especially if we shoot down every UFO that comes into our airspace without asking who they are and what they want. Right from the beginning we started scrambling planes, trying to shoot them down, but their technology was superior enough that we weren’t able to get away with it, certainly not for a long while. ”During that period of time they could have taken us over without any trouble if they wanted to, so I think, rather than developing our own Star Wars to protect ourselves against them, we should work with the benign species that are of a vast majority and work together, and rely largely on them, of course, and cooperate, so that we would be contributing something at the same time; I don’t think there’s any point in us developing a galactic force that would tempt us to ride on our own and get into mischief, which is one of the things that some of them are concerned about.”

According to the former minister our governments have been trying to shoot down UFO’s for a VERY long time.

Paul Hellyer is one of the few VERY brave men on this planet who is not afraid of telling the truth to the people of this world.  He has risked EVERYTHING including his reputation to tell the world about what he knows and it is time that the masses of the planet listen to what he is saying!

With so many strange flashes being witnesses in the skies above us, could it be that Paul knows even MORE than he is making out?