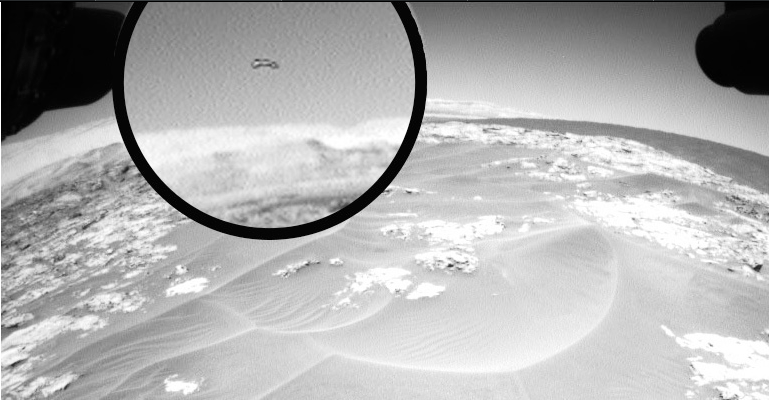 As time passes by, planet Mars is becoming more and more intriguing. From the countless shapes that could one day prove to be real artifacts left behind by a former Martian civilization, to bizarre shapes witnessed by Curiosity rover upon the sky of the Red Planet.

Newly released images reveal another UFO speeding across the sky. Could this be an authentic craft, or is it just another lens artifact? At a first analysis, the object appears to be closer to the rover than the previous recorded sightings. Because of this, its shape can be observed better, however, its interior is somehow mixed with the sky contrast, thus raising some questions of it being an actual flying object or not.

If we look at the second picture taken only moments after, the strange object disappears. Could this confirm the fact that the presumed UFO is traveling at a very high speed? Or is it just another step towards the dust/ lens artifact hypothesis? Why doesn’t it appear on the second photo as well?

Because it’s hard to judge from only one image, here are a few similar ones which show the activity of UFOs near NASA’ rover. In the sky and on the ground, the curious phenomenon slowly dissipates the hypothesis of a mere coincidence.

A black dot appeared on two consecutive images captured by Curiosity this November. Its position was different in both pictures, revealing the traveling speed of the UFO. Because of the big distance between the object and the NASA rover, its shape cannot be accurately determined, but it’s likely that it was indeed a significant discovery because the Youtube account describing the event was closed after a couple of days. Fortunately for us, the pictures still remain.

Another similar case from Mars exposes several bright orbs which appear to be attracted to the Curiosity rover. Looking like a bunch of local spirits, the strange orbs can be seen in a series of eight photos. This case is even more interesting because the UFOs are really similar to the ones seen on Earth.

Is it possible that an intelligent design is spying on us? Well, if we analyze all the manned missions in space and all the different sightings from Earth, it’s always a UFO present in sight that’s spying from afar or from a close view. Are these all coincidences that can be explained by normal phenomenon occurring in space?

Does this image reveal further evidence of flying objects on Mars? Or is it just another camera malfunction, a bit of dust on the lens that’s clouding our judgement?