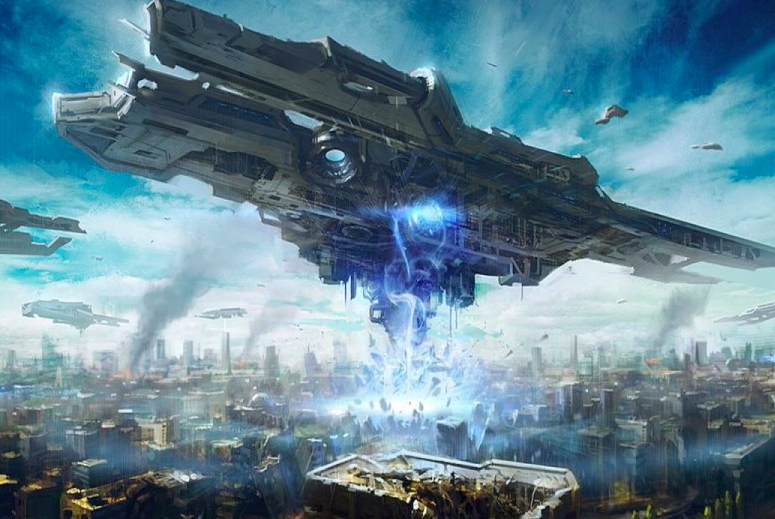 The alien invasion is already here. Remember when you thought that if hostile aliens arrived on earth, they would arrive in big ships in the sky, and humanity would unite and fight against them like in the movie Independence Day, thats pretty funny, because aliens were much smarter than that. Well, the aliens did come, except they didn’t arrive in a big ship in the sky like douchebags, people are so dumb and can’t see it. The aliens are interdimensional entities, they don’t need a ship to invade the earth, what they did is they actually invaded peoples bodies instead of the earth, why would they need to invade the earth when they can just invade the hosts of the earth. The aliens have invaded the minds and bodies of the men and women on this planet, the ones they invaded are normally referred to on this planet as “Liberals” and “Demoncrats”. After they successfully invade a human being, they start fighting against the rest of us who are not invaded by them. You see the aliens are very smart, they’re using the bodies of some people who are susceptible to their invasion to a high degree (because not everyone is) to fight against those they cannot completely invade, and the reason they cannot completely invade them is because there is a protective shield around those people to guard them against mind control, and the invasion of their bodies.

I have been studying and researching all religions, NDE’s, Paranormal Activities, UFO’s, Aliens, Ghosts, Spirits, Secret Societies, Mental Illnesses, Mind Altering Drugs, and many other phenomena for the past 20 years, and I have finally put it all together. It’s a perfect and brilliant plan by the control seeking aliens who have mind control technology. With this technology they cannot be detected by anyone or anything (except for a few who can detect them, such as myself and some others, I can detect them) and they can do whatever they need to do under stealth. All anyone sees is the same old story, humans fighting one another, this is why humans have not been able to get along for millennia. The astounding thing is that they didn’t just arrive recently, they arrived thousands of years ago, and created secret underground civilizations and societies, and have been ruling humanity for ages through these secret societies, famously known as the Illuminati. They have control of the Media, News, Entertainment, Hollywood, The Music Industry, and they have taken over many mainstream religious institutions as well. They have also taken control of the justice system through the control of judges, they have control of the US government, and the governments of many other countries, they’re sometimes referred to as the “Shadow Government”.

Until recently they controlled the United States CIA, and the FBI as well. They control everything except a few people in government, and some institutions and organizations. The people and organizations they DO NOT control are as follows; President Donald Trump, right wing alternative media, Fox News for the most part, and true Christians who are immune to their mind control and body invasion. Why do you think most Liberals and Democrats are of every religion, except Christian? Because most true Christians cannot be invaded. Now when I say “TRUE CHRISTIANS” I mean that vehemently, because many Christians are under their control as well, because they’re fake Christians, and are not immune to their invasion, these might be a minority in the world, some of which are the fake Christians in the democratic party. Most people are compromised, they are totally under intense mind control and are doomed, unless they wake up and accept Jesus Christ as their personal Lord and Savior, they are doomed. The alien entities have invaded their bodies and minds to such a degree where they have no more control of themselves, they have no control of close to 90 percent of their own thoughts. The only way to be free from the invasion is to use the 10 percent of your own thought that is left over and accept Jesus Christ into your life. When you accept Jesus Christ as you personal Lord and Savior, you slowly become immune to the alien invasion and they cannot control you, and you start seeing the world as it truly is without any deception or filters.

Now I will explain as to what happens after a human being gets invaded by an interdimensional alien entity. The first thing the entity does is that it slowly starts mimicking the thoughts of the host it invaded in the voice of its host. So the entity might say something like “look at that neighbor right there, I fucking hate that guy” and the host hears that phrase as a thought in their head in their own voice, so they think it’s their own thought and they are thinking it. The alien knows to start very slowly and subtly, so it becomes very natural for the possessed host to get accustomed to it. At first the invaded host might not pay too much attention to the subtle changes of thought that is being introduced to them very slowly and one by one, all it is, is just a faint voice in the back of their mind, but as time goes on, the entity starts berating their host more and more, until it becomes a clear thought that the host really starts listening to, paying attention to, and believing in. Why would they not believe it right? to them It’s natural, it’s their own thoughts. So what happens in this exemplary case is they start hating their neighbor for no clear reason, or maybe a minor reason that the entity uses and pounds inside of their mind over and over again, where otherwise you would have forgave that individual very quickly for that minor reason if you were not under this kind of possession. The bottom line and objective of the alien is to sow discord, and division among the people through mind control, so that they can then take advantage of that division in multitude of ways. You see power comes from unity, and powerlessness comes from division. This is why the entities have made the mantra of diversity such an important theme in the US culture, when the total opposite is true. So in this way, as they mimic thoughts into the minds of ordinary folks around the world, they slowly manipulate, and mold the person into whatever way they want them to act like and be, sooner or later you have no more thoughts that are truly your own, which define who you really are, because the core of your being, and who you are (as beliefs shape your reality) has been slowly but surely altered through these types of manipulation. This is also why some people that are schizophrenic or have other mental disorders start hearing voices in their heads, its not that they’re crazy (although some really are crazy, but thats another topic) they might have a slight physiological impairment in their brain, but the main reason is that they are invaded by an entity. Now because there is something physiologically wrong with this schizophrenic individuals brain, the voice changing technology that the alien is using to transform its voice to the voice of the host its invading, is not working very well on that individual, so what happens is the mentally ill person hears the voice of the demon first hand, without any filters, for example telling them to go kill someone, or do some other awful thing. As you’ve heard many killers or mass murderers proclaim (“a voice in my head told me to do it” they say) notice these voices never tell them to do any good things, its always bad things, and the person hearing these voices thinks they’re going crazy, when the only thing that has happened is the voice mimicking filter the alien is using to deceive people, is not working for that individual, so they’re actually hearing the aliens voice, but the alien doesnt care because it knows that everyone else is just gonna write that person off as “crazy” or “mentally disturbed” well they’re disturbed alright, by a fucking alien. So because of this they start thinking they have totally gone crazy, and start doing all sorts of insane things, whatever the alien wants to harass this person with, thats what they do. One favorite tactic the alien entities use to destabilize their hosts and the public peace in general, is to send their hosts thoughts of homosexuality, and gender confusion, this way they not only sow confusion and discord into that person, but the behavior exhibited by that individual destabilizes the public as a whole. You see these individuals are doing unnatural things in public which destabilizes the publics perception of reality, and its consequences are usually seen years later in forms of mass shootings, murder, etc. that you cant really link back to what the cause was, but in reality that was the cause. The aliens know what caused it, and is why they did it in the first place, but human beings don’t.

The aliens are what we call on earth as demons, they control humanity by invasion of peoples bodies and minds. They do come and go from the earth in physical form as well, in UFO’s, and Spaceships, and have underground facilities as well, they also work closely with greatly compromised agents and organizations deep inside nations governments, who are traders to humanity. When they do come and go on the earth in physical form, it’s usually very stealth and secretive, because unlike the stupid movie “Indepence Day” the last thing they want is for people to know about their invasion. You see the secret is not that there are UFO’s, everyone knows that there are, the cat is out of the bag on that one already, the real secret they don’t want anyone to know about is that they’re invading this planet right now as you sit there with your thumb up your ass eating Cheetos and watching American Idol. So as stupid people fight one another about some dumb thing, they are quietly invading the planet, and trying to take total control of it which they almost have. Recently in the US people woke up to the utter insanity plaguing their country, so they elected Donald Trump as president to fix a lot of the issues that we’re facing the US, but sadly they only woke up to half the truth. The symptoms of a collapsing nation is what woke them up to it, but it was not the whole truth. They said to themselves “these liberals and democrats are fucking crazy, look at what they’re doing to our country, we better start opening our eyes, and slowly fixing this whole mess” but what they didn’t understand is that the democrats are not just crazy, they’re aliens.

Many have questioned why UFO’s don’t come out in the open, and land on the white house lawn, show themselves, and communicate openly with the public, the reason for this is that their intention is not to communicate with humanity, but to control humanity. Their objective is the total domination and control of the planet through any means possible and for that they need utter ignorance about them from the people of earth, not a meet and greet

Previous Post: Aliens Have Visited us, UFO’s are Real But it’s Kept From us Due to Political and Economic Interests