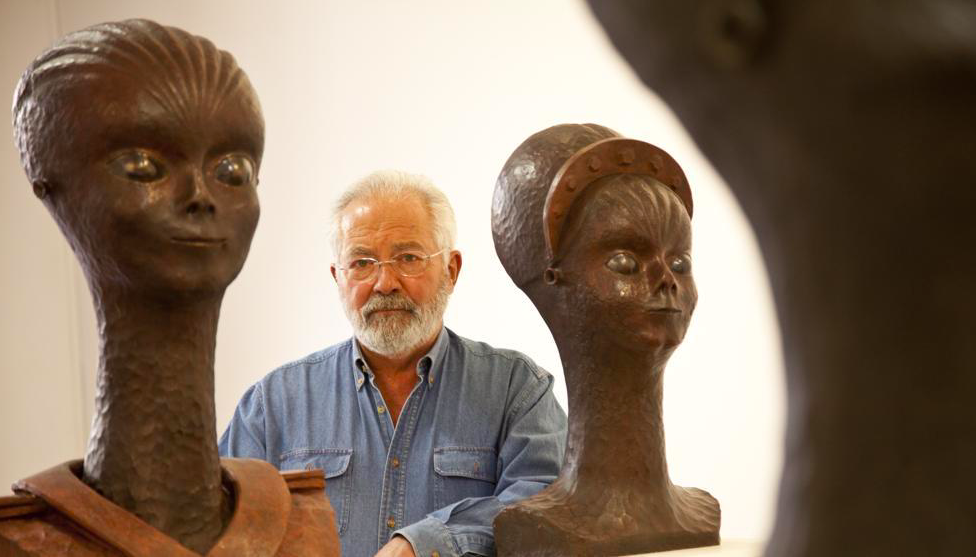 After seeing a UFO or an extraterrestrial (ET), would you share your experience with others? Odds are that tons of people out there have had encounters with ETs, but were too scared to come forward. There is a huge stigma surrounding UFO and ET phenomena, which is largely due to mainstream media and Hollywood.

It’s no secret that the U.S. government has been discussing UFOs for quite some time; leaked FBI documents, emails from the Clinton campaign, the black budget secret space program, and even quotes from former U.S. presidents have confirmed that. Even the Vatican has addressed extraterrestrial intelligence, yet many people will simply brush off this subject as if it’s a joke.

Well, that’s not the case for Spanish artist Robert Llimós. After seeing a UFO and ETs face to face, he was inspired to share his experiences through his art. By painting what he saw, he hopes to desensitize people to ETs so that hopefully, if and when they finally return, people won’t be scared of their appearances.

While on vacation in Brazil, Robert went for a walk on his own. Bringing a pencil and some paper, he set out to adventure through the dunes. He found a place to sit and soon realized he was directly in front of a UFO.

Here are some of his illustrations depicting his experience:

Robert explains, “A window opened with two figures looking at me.”

“They had a regal bearing, with long necks, deformed skulls and black eyes. She was wearing a small tiara on her head.”

Robert believes that the extraterrestrials who visited him chose to contact him because of his painting and sculpting skills. He feels that they were aware of his artistic abilities and that they knew he could accurately portray their appearances. Despite their diverse physical characteristics, Robert felt as though they weren’t trying to harm him, but rather help him.

Robert explains, “They are like older brothers who want to help us, not harm us.”

“My role is to reduce the fear of them before they make their return. I make this work so you are not scared of seeing a figure with a long neck and scales. Perhaps in 20 years, people will have seen these figures and then they’ll say, ‘That crazy man was right!’ “

It hasn’t always been easy for Robert. “Some of the people around me understand and accept this, and some don’t. I know it’s hard to believe. I have to believe a lot of things that I don’t see. When I draw them, they become tangible. I’d like to see them again,” he says.

You can check out more of Robert’s artwork on his website here. If you’re interested in listening to Robert’s story, told by him, you can check out this VICE interview here, which is where I sourced his quotes within this article.

Many people seem to think that ET phenomena are a joke, which is primarily due to lack of disclosure and the stigma surrounding the topic. In reality, there are so many government documents and emails as well as countless reported human encounters with UFOs and ETs that it would be ignorant to deny the facts.

Why UFO and ET Phenomena Are Very Real

The following are only a few of the quotes from high-level government personnel discussing UFOs:

“There are objects in our atmosphere which are technically miles in advance of anything we can deploy, that we have no means of stopping them coming here … [and] that there is a serious possibility that we are being visited and have been visited for many years by people from outer space, from other civilizations. That it behooves us, in case some of these people in the future or now should turn hostile, to find out who they are, where they come from, and what they want. This should be the subject of rigorous scientific investigation and not the subject of ‘rubishing’ by tabloid newspapers.” (source)

“There is abundant evidence that we are being contacted, that civilizations have been visiting us for a very long time, that their appearance is bizarre from any kind of traditional materialistic western point of view, that these visitors use the technologies of consciousness, they use toroids, they use co-rotating magnetic disks for their propulsion systems, that seems to be a common denominator of the UFO phenomenon.” (source)

“Yes there have been crashed craft, and bodies recovered. We are not alone in the universe, they have been coming here for a long time.” (source) (source)

– Dr. Edgar Mitchell, 6th man to walk on the moon.

“In my opinion I think they were worried that it would panic the public if they knew that someone had vehicles that had this kind of performance … so they started telling lies about it. And then I think they had to cover another lie, you know, tell another lie to cover their first lie, now they don’t know how to get out of it. Now it’s going to be so embarrassing to admit that all these administrations have told a lot of untruths…. [and that] there are a number of extraterrestrial vehicles out there cruising around.” (source)

There have even been numerous large-scale UFO sightings, like when 60 school children saw a UFO and ETs in Zimbabwe, or when 1 million people witnessed a large UFO hovering over Los Angeles.

What We Can Learn From Robert Llimós

We can all learn a lot from Robert’s passion and determination to spread the truth. We live in a society that thrives off fear; it’s precisely why governments use false-flag terrorism and why the elite further perpetuates separatism amongst races, classes, etc. Fear is the one thing that can perceivably control us; in a way, it connects us all. However, our fear can also blind us from the truth and prevent us from accepting knowledge and especially the unknown.

That is why it’s crucial to challenge fear, which is precisely what Robert is doing. He recognized that the beings who visited him don’t need to be feared and feels passionate about sharing this with others through his artwork.

His paintings also speak to how using a creative outlet can help us understand some of life’s most notable events. Expressing ourselves can be incredibly therapeutic, as it allows us to expose our vulnerabilities and speak our truths, whether that be verbal or not. For Robert, his creative outlet is through art. For me, it’s typically through writing, whether that be through CE or just in my journal, and yoga.

Expressing ourselves freely not only helps us to accept that what happens in our lives has, in fact, happened, but it also allows us to truly feel our emotions, overcome them, and ultimately move on.

Previous Post: ALTERNATIVE NEWSEerie New Facts About A UFO Researchers Death After Texting: “If Anything Happens To Me, Investigate”

Next Post: Facebook User Shoots Live Footage Of Multiple UFOs In Front Of Her Condo In Baja, Mexico