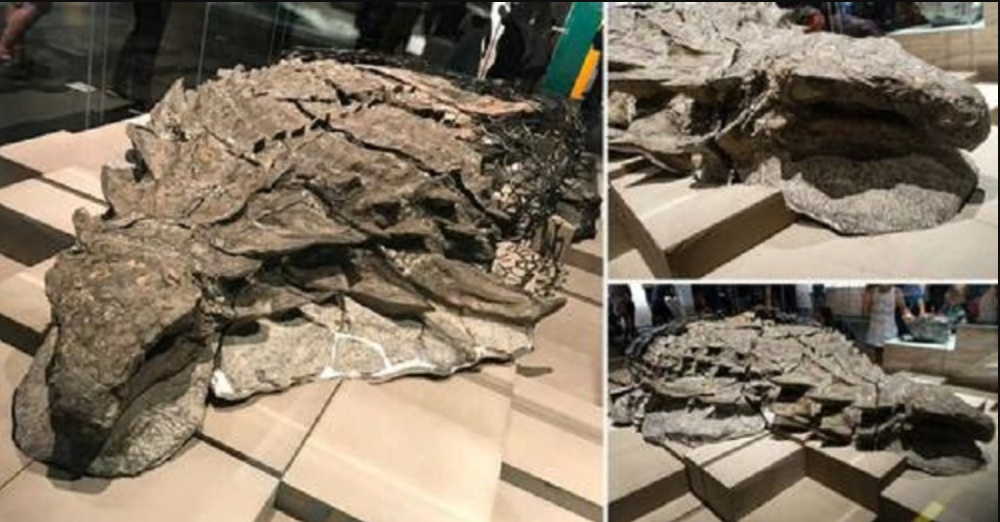 Some years ago, in Western Canada, a mining work led to one of the world’s most significant discoveries in recent memory. A group of miners accidentally stumbled upon what is possibly the most intact dinosaur carcass science has ever seen. Borealopelta (meaning “Northern shield”) is a genus of nodosaurid ankylosaur from the Early Cretaceous of Alberta, Canada. It contains a single species, B. markmitchelli, named in 2017 by Caleb Brown and colleagues from a well-preserved specimen known as the Suncor nodosaur. © Wikimedia Commons

The nodosaur, a herbivore that was 18 feet long and approximately 3,000 pounds, was found in 2011 by the team working 17 miles north of Alberta, Canada on a mining project. This is a fascinating find since the dinosaur fossils are so well preserved; from them, we may learn a great deal about the dinosaur’s life and death.

Scientists claim the remains seem like they were only a few weeks old despite the fact that the dinosaur died over 110 million years ago. This is due to the optimal conditions under which they were preserved.

The dinosaur — Borealopelta (meaning “Northern shield”) is a genus of nodosaur that lived during the Cretaceous period — was one of the many that met its end as a result of being swept away by floodwaters from a river as it made its way into the ocean.

The thick armor that surrounds the skeleton is responsible for its perfect condition. It is covered from head to toe in tile-like plates and, of course, a grey patina of fossilized skins.

Shawn Funk, who was operating heavy machinery in Millennium Mine, made the surprising discovery when his excavator hit something solid. What appeared to be walnut-brown rocks were actually the fossilized remains of a 110 million-year-old nodosaur. The imposing herbivore was intact enough for the front half — from the snout to the hips — to be recovered.

“The dinosaur’s petrified remains are a wonder to behold,” says Michael Greshko of National Geographic.

Fossilized remnants of skin still cover the bumpy armor plates dotting the animal’s skull. Its right forefoot lies by its side, its five digits splayed upward. I can count the scales on its sole,” writes Greshko.

Because of its rapid subsea burial, the dinosaur looks very much like it did millions of years ago. According to paleontologists, the fact that its tissue did not decompose but instead fossilized is extremely rare. Unlike its close relative the Ankylosauridae, nodosaurs did not have shin-splitting till clubs. Instead, it wore prickly armor to keep predators at bay. The 18-foot-long dinosaur, which lived during the Cretaceous period, could have been considered the rhinoceros of its time.

Previous Post: Expert Warns: Stop Using These 20 Medications Because They Cause Memory Loss

Next Post: The Mystery of Giant Skeletons: Photos and Videos Show That The Earth Has Been Inhabited by Giants