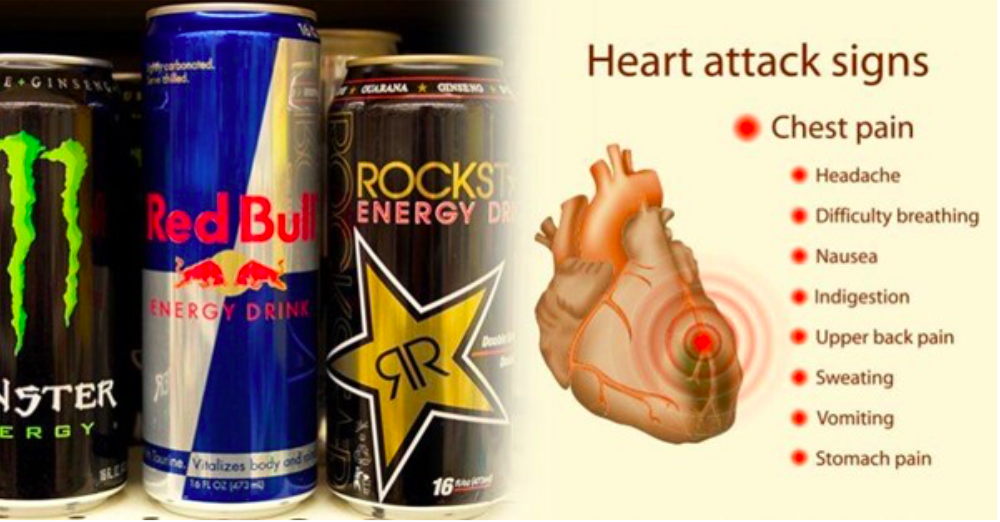 Caffeine keeps us alert since it boosts our energy levels, which is the same as in the case of the consumption of energy drinks.  However, the high content of chemicals in these drinks makes them highly dangerous for our health.

Studies have found a link between energy drinks and heart attacks, and the death of a 33-year old Cory Terry, a Brooklyn resident, from a heart attack just confirmed it. Namely, this man used to drink a Red Bull can daily, which was his only flaw, since he was physically active, and did not smoke or drank.

The Mayo Clinic conducted a study which showed that energy drinks can aggravate cardiovascular issues and provoke a heart attack. Scientists gave a daily dose of ½ a liter of an unidentified energy drink to 15 healthy people and afterward found that it increased their blood pressure by 10% after 4 hours. It increased their heart rate and blood pressure and raised their risk of heart attack.

The following list is a compilation of some of the risks of the over-consumption of energy drinks, based on data gathered from 7 years of calls to the Australian Poisons Center:

10. Paresthesia (tingling or numbing of the skin)

Despite high amounts of sugar and caffeine, energy drinks like Red Bull contain taurine, which is a powerful stimulator.

Researchers from the World Health Organization (WHO) have written a narrative review of studies on the health risks linked to the consumption of energy drinks and policies related to energy drinks.

Their review has been published in the peer-reviewed health journal Frontiers in Public Health on an open-access basis. They concluded that the health risks linked to energy drink consumption are primarily related to their caffeine content, but more research is needed to estimate the long-term effects of consuming common energy drink ingredients. More and more studies are showing that the consumption of energy drinks leads to various adverse effects, and the risks of heavy consumption of energy drinks among young people have largely gone unaddressed and might become a significant public health problem in the future.

Even though there are also some studies which claim that stimulants in energy drinks are not dangerous on their own, their combination might seriously damage our health.

Therefore, in order to avoid the possible side-effects of these stimulants, take a cup of coffee instead of an energy drink and protect yourself from its possible horrific effects.

Next Post: Once A Week Soak The Feet In Vinegar, And You Are Going To Heal Yourself From Many Diseases