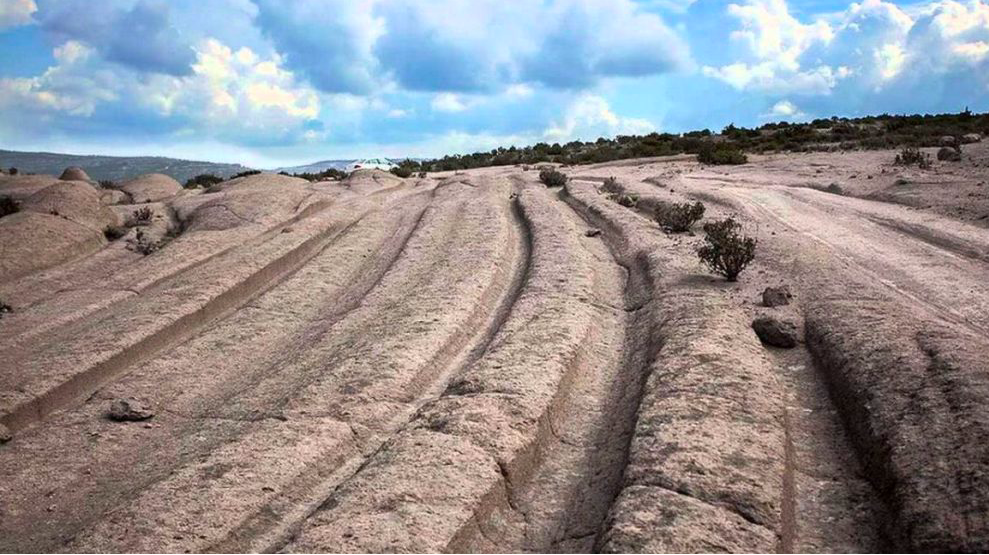 In Beyond Science, Epoch Times explores research and accounts related to phenomena and theories that challenge our current knowledge. We delve into ideas that stimulate the imagination and open up new possibilities. Share your thoughts with us on these sometimes controversial topics in the comments section below.

Petrified wheel tracks found in various locations, including parts of Turkey and Spain, were left by heavy all-terrain vehicles some 12 million to 14 million years ago, according to Dr. Alexander Koltypin, a geologist and director of the Natural Science Research Center at Moscow’s International Independent University of Ecology and Politology.

This is a controversial claim, since human civilization is only thought by mainstream archaeologists to extend back several thousand years, not millions of years. That’s not to mention the idea of a prehistoric civilization advanced enough to have such vehicles.

The wheel tracks cross over faults formed in the middle and late Miocene period (about 12 to 14 million years ago), suggesting they are older than those faults, Koltypin said on his website.

At the time, the ground would have been wet and soft, like a malleable clay. The large vehicles sank into the mud as they drove over it. Tire ruts at various depths suggest that over time the area dried out. Vehicles were still driving over it as it dried, Koltypin said, and did not sink as deeply.

The vehicles were similar in length to modern cars, but the tires were about 9 inches (23 centimeters) wide.

The vehicles were similar in length to modern cars, but the tires were about 9 inches (23 centimeters) wide.

He said geological and archaeological works that contain information about these ruts are few and far between, especially in English. Such references usually say the tracks were left by carts pulled by donkeys or camels.

“I will never accept it,” he wrote of these explanations. “I myself will always remember … many other inhabitants of our planet wiped from our history.”

Koltypin maintains that the tracks could not have been left by lightweight carts or chariots, as the vehicles would have been much heavier to leave these deep impressions.

He has conducted many field studies in various locations and reviewed published studies on the local geology extensively. He hypothesizes that a network of roads spread through much of the Mediterranean and beyond more than 12 million years ago.

These thorough-ways would have been used by people who built underground cities like that at Cappadocia, Turkey, which he theorizes are also much older than mainstream archaeology holds.

Petrified wheel ruts have been found in Malta, Italy, Kazakhstan, France, and even in North America, Koltypin said.

One of the major clusters is in Sofca, Turkey, with tracks covering an area of about 45 by 10 miles (75 by 15 kilometers). Another is in Cappadocia, Turkey, where there are several pockets, one of the biggest being about 25 miles by 15 miles.

The petrified impression left by an ancient building amid wheel ruts in the Phrygian Valley, Turkey. (Courtesy of Dr. Alexander Koltypin)

Mainstream archaeologists attribute many of the tracks to various civilizations at different time periods. But, Koltypin said it is not right to attribute identical roads, ruts, and underground complexes to different eras and cultures.

He instead attributes them to a single, widespread civilization in a distant age. Multiple tumultuous natural occurrences—such as tsunamis, volcanic eruptions, flooding, and tectonic disturbances that have left major fractures in the Earth—have wiped out much of the remains of this advanced prehistoric civilization, he said.

But looking at the impacts these events have had on the geological formations, Koltypin has also been able to determine that these ruts and roads were most likely made before these catastrophic events happened.

The heavy mineral deposits coating the tracks and the erosion also suggest such great antiquity, he said.

Petrification can happen within a few hundred years or even a few months, so it is not the fact that wheel ruts are petrified that suggests they are very old. But, Koltypin argues that the other geological evidence suggests they were made during the Miocene period millions of years ago.

The surrounding underground cities, irrigation systems, wells, and more, also show signs of being millions of years old, he said. But, he said, “Without significant additional studies by large groups of archaeologists, geologists, and experts in folklore it is impossible to answer the question, what was … [this] civilization?”

Previous Post: WHY HAVE ARCHAEOLOGISTS IGNORED THESE REMARKABLE ANCIENT DISCOVERIES