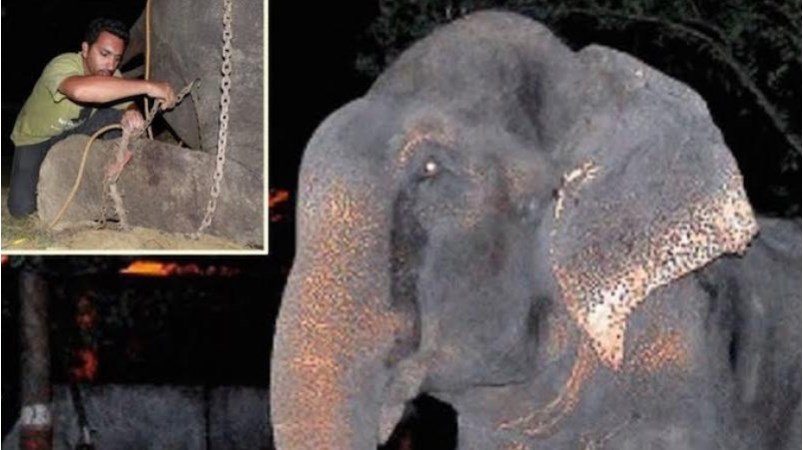 Raju, the elephant, had endured five whole decades of confinement. Chained up and suffering various forms of abuse, the poor animal probably didn’t know what to do anymore. However, when he became aware that he was being rescued, the emotion became too much for him, and he started to weep in happiness.

Every day for fifty years Raju was stuck with shackles around his feet, being treated like a piece of property rather than a thinking, feeling animal. He had probably lost all hope until he was gifted what should have never been taken away in the first place; his freedom.

For the past five decades, Raju has been forced to walk the dusty roads of India, interacting with tourists for coins and food. During his rescue, there were many reposts of abuse and malnutrition. The emotional damage was no less severe as is evident by the fact that such a large, intelligent animal was reduced to tears when he realized what was happening.

It’s not an uncommon occurrence and has been observed and reported by many animal behaviorists throughout the years. Elephants have shed tears during moments of high emotion, like the death of a calf or when reunited with elephants that they had known in the past. Not all elephants cry, but then, neither do all humans.

How bad had Raju been treated?

Wildlife SOS, the UK-based animal charity stated that Raju was sold on and on and had up to 27 owners. When he was found, his state was awful. With not enough food to eat, he began eating plastic and paper. His nails were severely overgrown, he has ­abscesses and wounds because of the spiked shackles he was made to wear. Furthermore, continuously walking on a tarmac road has led to his footpad overgrowing.

When it became clear to the old elephant that the team was there to help him, he began to cry. Chained up 24 hours a day, this was an act of ­intolerable cruelty. The team that rescued him was absolutely amazed to see tears rolling down his face during the rescue. It was highly emotional. Elephants are extremely intelligent and emotional animals. No one can even begin to imagine what it was like for him being held captive for so long. Imagine if that was a human being?

Where is Raju now?

After being rescued, the elephant was relocated 350 miles away to Wildlife SOS’s Elephant Conservation and Care Centre at Mathura. Here, he received much needed medical attention before becoming companions with the other rescued elephants at the sanctuary. He finally has a home as well as some new friends to play with.

Previous Post: The Red Cross has built exactly 6 homes in Haiti with 500 million dollars in donations