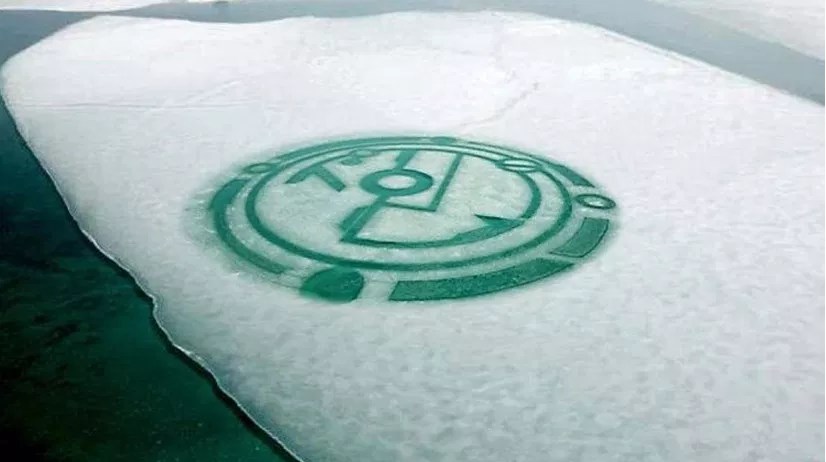 The crop circles (strange patterns that appear mysteriously from the overnight in agricultural fields) have been causing confusion and controversy since time immemorial. It is true that circles are better known in the United Kingdom, but they have spread throughout the world in recent decades. The mystery has inspired innumerable books, blogs, researchers (nicknamed “cereólogos”) and even Hollywood movies. Despite having been studied for decades, the question remains: Who or what is doing them?(ice circle)

Many people believe that crop circles have been documented for centuries, even some scientists have their own opinion about it. In 2017, Dr. Horace Drew stated that the circles in the crops are real and contain hidden messages from aliens or time travelers. Dr. Drew, who has a Ph.D. in chemistry from the prestigious California Institute of Technology (Caltech), also suggested that circles are a method that extraterrestrial beings use to try to communicate with the human race. Whether they are well-crafted deception or extraterrestrial messages, they usually appear in agricultural fields and the last place where we would expect to see one of these circles is in a frozen lake. Well, this is what has happened in China.(ice circle)

On April 12, a gigantic and mysterious figure appeared on the ice of Qinghai Lake. According to the photographer Qing Xiu, of the tourist company Qinghai Lake Tourism Group, he took the photographs at 11 o’clock in the morning of the same day, and the circle seemed to have approximately more than 100 square meters. So far no one has been able to explain its origin and it is also unclear how it appeared in Qinghai Lake.

Due to the spectacular nature of the images, the mysterious circle has caused a stir in Chinese social networks, where thousands of users have tried to offer an explanation for the geometric figure. The most skeptical say that the “circle in the ice” has been created by pranksters to attract attention. According to some, the strange form could only have been made from the air, for example, using a helicopter, although the inhabitants near the lake did not see any aircraft for weeks.

There are also those who believe that the symbol is a logo related to a Chinese automobile company called AION, so there is a possibility that the circle is a marketing strategy. But experts in the field say that in this particular case there does not seem to be any imperfection, a basic detail to detect false circles. The aliens are perfectionists due to their advanced technology. Then the explanation would be that it is a message coming from civilizations of other worlds.

Whether real or fake, Qinghai Lake is the largest lake in China and receives the waters of 23 rivers and streams, located 3,205 meters above sea level, in a depression of the Tibetan plateau. In addition, it is considered the second largest lake in Central Asia after the Issyk-Kul. In the West, it is known by Kokonor, because the lake was traditionally a border area between the Mongolian and Tibetan peoples. And like other places in the world, Qinghai Lake is surrounded by legends and mysteries.

It is said that in its waters lives a beast that supposedly resembles a dragon, with a snake head and iridescent scales. But apart from this mysterious creature, many have seen numerous sightings of strange lights coming and going from Qinghai Lake, which has led some ufologists to believe that the place can house an extraterrestrial submarine base.

What is your opinion about the mysterious circle in the ice? Is it fake or an extraterrestrial message?

Next Post: Strange Creatures Caught On Video Near Cave