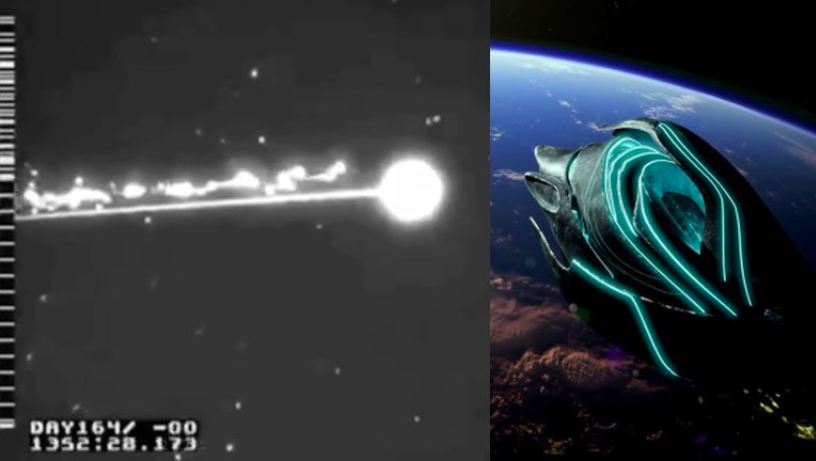 Conspiracy theorists are claiming the infamous alien satellite was recently shot down by the equally-infamous Illuminati. But things aren’t always what they seem.

The video evidence uploaded to YouTube makes a bold claim: the age-old Illuminati, also known as the Enlightened Ones have managed to bring down the Black Knight Satellite, an alien device that is said to have been orbiting the Earth for over 13,000 years. Until very recently, that is.

According to claims made by YouTube channel UFO Today, the alien satellite was blasted out of the sky by a “secret Illuminati war plane.”

In the article accompanying the video, the uploaders maintain that “two days ago a secret server of Wikileaks was used to upload a huge amount of data coming from an unknown source. Apparently, all the document and files were marked with metatags that contained references to the legendary Black Knight satellite.”

The following day, the strange video allegedly showing the destruction of the Black Knight Satellite was uploaded to YouTube.

The video description says that on March 16, a secret military mission funded and ordered by the Illuminati themselves had a war plane hit the alien satellite with an anti-matter warhead. The video explains that prior to the offensive, the group had secretly gathered data about the Black Knight Satellite and managed to uncover several weak spots. Therefore, the strike was a precise hit aimed at the BNS’ Achilles Heel.

Immediately after the video was uploaded, UFO analysts chipped in with their own theories.

Controversial UFO channel Secureteam10 claims that immediately following the missile impact, several escape pods can be seen leaving the satellite and the scene. This would imply the satellite had extraterrestrial occupants and was not just an autonomous alien probe.

Some speculate the offensive carried against the Black Knight was the result of the Illuminati intercepting a signal originating from the satellite. The signal is said to have been a call to action to the original builders of the satellite because the time to conquer our planet had finally come.

Naturally, this is all unfounded speculation based purely on a video showing an object burning up as it entered the atmosphere.

After a very brief time spent digging around, I identified the original uploader of the video as YouTube channel Sexy Girls and random stuff. Not kidding.

So what this does to the credibility of these allegations is more damaging than the explosion seen in the video.

And as it turns out, the controversial video is actually an edited portion of an older video. In 2010, NASA filmed the fiery re-entry of the Japan Aerospace Exploration Agency (JAXA) Hayabusa spacecraft. No Illuminati war plane, no anti-matter warhead, no Black Knight.

By all accounts, the alien satellite is still up there, slowly orbiting and gathering data about life on Earth. Shooting down the Black Knight Satellite won’t be that easy, you know.

Next Post: WATCH HOW A LIGHTNING STRIKE TEMPORARILY DISABLES THIS UFO’S CLOAKING SHIELD