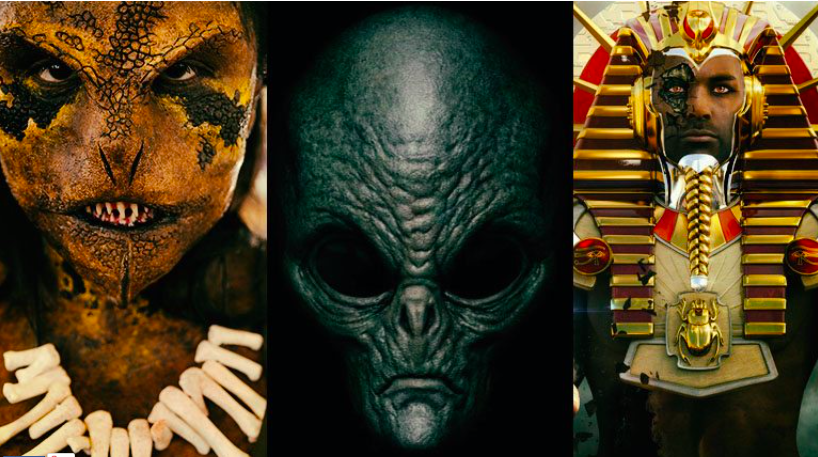 The myriad of sightings and abduction cases have allowed us to differentiate the alien species that are currently involved in altering mankind’s development without our consent. Below you will find 4 of the most manipulative and dangerous of them all.

A large number of astronomers believe there exists a 12th planet in our solar system. The aptly-called Planet X is identified with Nibiru, the home world of the Anunnaki. Located behind the orbit of Pluto, this planet revolves around the sun in an elliptical orbit and, unlike other planets, it moves counterclockwise. Proponents of alternative history believe Nibiru once collided with a solar system planetoid called Maldek and gave birth to Earth.

The planet’s inhabitants are said to have landed on Earth some 400,000 years ago and colonized it with the intention of stripping it of its precious gold and minerals. For a while, the Anunnaki lived in an idealistic society and acted as mankind’s creators (or genetic engineers) and mentors. They needed an able workforce to do the heavy lifting so they employed in vitro fertilization and genetic engineering to create a new species, Homo sapiens.

It is said the Anunnaki never left Earth and have been secretly guiding (some would rather say hindering) mankind’s development. Almost every aspect of early human life is said to be an inherited trait from them. Our engineered DNA contains the markers of their male dominated, violent and vengeance-inclined typology.

The Anunnaki are believed to be involved in a conflict with the other contender for Earth domination, the Draconians.

Vile and deeply corrupt creatures, the Alpha-Draconians permeated human society eons ago and have kept a tight grip on it ever since. The oldest reptilian race in the Milky Way galaxy, the Draconians came to Earth from Alpha Draconis but their original home world is believed to be in another universe altogether.

Like other reptilians, the Draconians multiply by laying eggs. Unlike other reptilians, they employ the use of a battle hormone to speed up the birthing process and ensure that their spawn exhibits warlike characteristics. Alien theorists surmise that the dualistic nature of mankind is a remnant of Alpha-Draconian domination. In their society, females are not allowed to participate in war. Their role is to produce more soldiers.

A truly giant species, the Alpha-Draconian can measure anywhere from 14 to 22 feet tall and weigh approximately 2,000 pounds. Their massive bodies are covered in dark, leathery scales and some accounts describe them as winged creatures. Perhaps this is what gave rise to the ‘devil’ concept. A highly intelligent species, they are the only lineage of their kind that survived. They eliminated all the other ones.

The Alpha-Draconians are divided into two castes: the giant ones are part of a royal clan called Ciakarwhile the smaller ones are organized into an effective warrior caste.

Contactee Alex Collier says he was permitted to share some of the knowledge imparted to him by an Andromedan being named Moraney:

The Draconians are the force behind the repression of human populations everywhere in this galaxy, instilling fear-based belief systems and restrictive hierarchies. […]they’re extremely clairvoyant and extremely clever, and they can also be extremely sinister.”

The vain Alpha-Draconians consider themselves the first intelligent species to have appeared in our galaxy. They are ambitious and their expansionist policy led them to conquer many worlds. Their ego is as massive as their size, so they truly believe their rule over lesser evolved worlds is the only valid one. We are seen as an inferior species, so they continue to exploit us.

Not to be confused with the smaller (!) Alpha Draconian warrior caste, the native reptilians are believed to be indigenous to Earth. They also have a long history of interaction with the human society but their preferred method of collaboration usually involves using us as a resource. They have a hand in most upper echelon dealings and occupy positions of power that allow them to rule from the dark.

Described as 8 foot-tall bipedal lizards with humanoid traits, the native reptilians are covered in green scales and emit a foul body odor. They see the world through large eyes with vertical pupils, a trait that is shared by other reptilian species.

Very few information about their kind is known but most accounts identify them as a pioneering race employed by the Alpha-Draconians in their earliest attempts to dominate Earth. They are present in the mythologies of ancient cultures from all over the world and the descriptions match regardless of age or continent: malevolent beings with an increased hostility towards man and his kin.

Hardcore conspiracy theorists will tell you they infiltrated human society to its bone, manipulating the elite into doing their bidding. Our institutions, organizations and financial system were created and are continuously influenced by these reptilians that call Earth home.

Bold, bald and pale, the Tall Greys proudly stand 8 feet tall. Considered masters of technology, they act as emissaries in most meetings between man and alien. Their lead position allows them to. They are the genetic engineers of the Short Greys, the species most commonly associated with abductions. Involved in various experiments, they are rumored to have designed human-grey hybrids that walk freely among us. Their preferred MO includes mind control techniques and striking lucrative diplomatic agreements with the global ‘shadow government.’

Most accounts claim they originated somewhere in the Orion constellation but some speculate their advanced technological level could mean they traveled to our universe from another one.

Although they are the real masterminds behind most human abductions and experiments, the Tall Greys rarely show their faces during their unethical procedures. Instead, they prefer to rely on their trusted minions, the Short Greys. One particularly intimidating scenario identifies their intentions as decidedly malicious: they want to develop a solid human-grey race of hybrids, one they consider worthy to become the Earth’s new keepers.

A progressive, egocentric species, the Tall Greys see us as mostly worthless, save for our scientific purposes. For them, the sons and daughters of man are nothing but a commodity. See that you never cross paths with them.

Next Post: Project SIGMA, or How They Began Selling Your Genome to The Greys