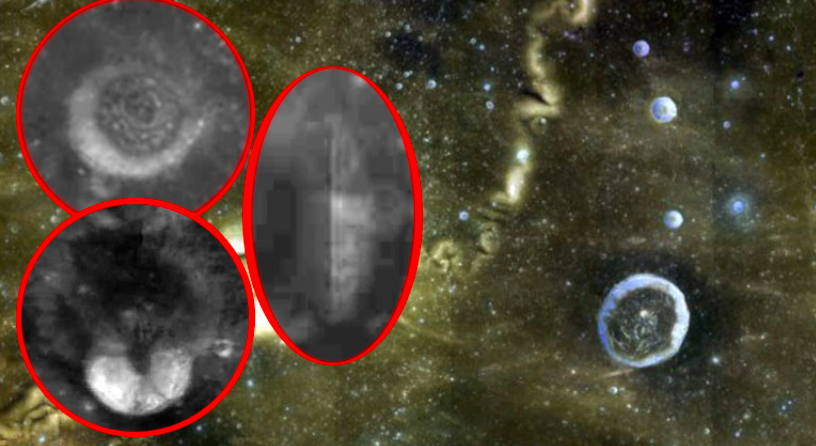 You’re a space agency and you know the public is expecting hi-res images of the Moon surface. What do you do? Bring out the ol’ airbrush!

In 1994, a joint mission between NASA and the Ballistic Missile Defense Organization (BMDO) saw the successful launch of the Deep Space Program Science Experiment, formally known as Clementine.

One month after launch, the 500-pound spacecraft positioned itself into lunar orbit and began transmitting photos of our satellite’s surface. Equipped with state of the art imaging technology, Clementine was more than able to capture hi-res photos of the Moon’s crust. And during its 300+ orbits, it had plenty of chances to gather meaningful data.

Those on the ground who were expecting to see the high resolution images were in for a surprise when the Navy released its first set of images. They were heavily pixelated and in low resolution .gif format, and little detail could be extracted from the images made available to the general public. What gives? they asked themselves.

How could those blurry images be the best available format sent back by a $200 million piece of space equipment? The whole thing remained a mystery for years. But slowly, people began to realize the images they were given showed obvious signs of tampering and censorship. Multiple areas of lunar interest had been purposefully blurred out as if NASA and the Navy were intentionally hiding something.

In many photos, the Clementine data showed blacked out areas, like the one in the image below.

This is the Rainer Gamma region, a 40 mile-wide albedo region west of the Reiner crater. The official explanation for the black square is ‘data loss’ but we all know this isn’t the case.

The next photo is another great example of image manipulation. As with the image before, the same ‘data loss’ pretext was invoked, but even to the untrained eye, this looks like intentional smudging. They could have said data corruption but it looks like they weren’t even trying to cover their actions.

This deliberate suppression becomes even more blatant in the famous lunar tower photos.

Even though they smudged the hell out of those unexplained structures, the cover-up artists managed to overlook a tiny detail. Find the center of the image, go right a little, if you reached the smudged lunar tower you’ve gone too far. Notice anything? Zoomed image below shows what I’m talking about.

This definitely looks like a solid object hovering well above the lunar surface. You can distinguish its triangular shape and even the fins at its rear end. These details can also be seen in the shadow the object casts below.

Even from sketchy, low-resolution images like these ones, the curious and free mind can extract some conclusions.

Naturally, these assumptions are backed by the multitude of valid and verifiable conspiracy theories, but don’t let me tell you about what goes on the Moon. Instead, take a look at the following video where government whistleblower Karl Wolf describes what he saw during his involvement with NASA’s Lunar Orbiter project.

Next Post: BIZARRE CASE: GREY ALIEN SHOT AND KILLED AT USAF BASE