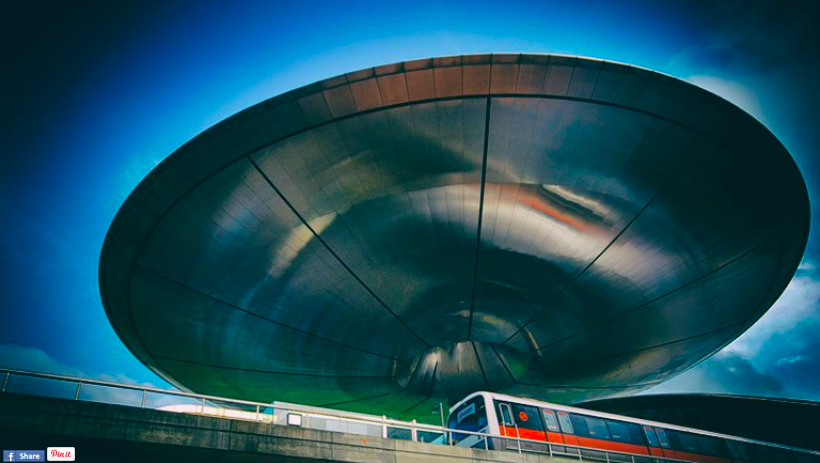 Official reports describing UFO sightings in such detail are really hard to come by.

After being kept secret for over 6 decades, a declassified Air Force intelligence report has become one of the best pieces of evidence towards proving the UFO enigma is not some made-up story.

On October 13, 1955, U.S. Senator Richard B. Russell Jr, chairman of the Armed Services Committee at that time, was on a train traveling through the Transcaucasia Region located in the former Soviet Union. One of the most influential politicians of his time, Russell was accompanied by his aide, Col. E. U. Hathaway and his interpreter Ruben Efron. All of them witnessed an intriguing spectacle offered by two saucer-shaped craft as they flew in parallel with their train before zipping off into the distance.

After reaching the American Embassy in Prague, the three men gave official statements that were classified as TOP SECRET at that time. They were interviewed by a Lieutenant Colonel Thomas Ryanshortly after the sighting had taken place.

According to the declassified reports, Russell was the first to see a flying disc “ascend and pass over the train.” Although Sen. Russell was somewhat familiar with the existence of secret projects and the spy planes being developed, he was still disturbed by what he had just witnessed and could not explain the origin of the highly-maneuverable and incredibly fast craft. He then rushed to get Mr. Efron and Col. Hathaway to see it.

“Col. Hathaway stated that he got to the window with the Senator in time to see the first (UFO), while Mr. Efron said that he got only a short glimpse of the first. However, all three saw the second disc and all agreed that they saw the same round, disc-shaped craft as the first.”

In the official report, Col. Ryan describes the incident as “an eyewitness account of the ascent and flight of an unconventional craft by three highly reliable United States observers.” The three men were not attention seekers but rather trustworthy representatives of the military and government, therefore their admissions were considered highly valuable depictions of the UFO phenomenon.

I doubt if you’re going to believe this, but we all saw it. Senator Russell was the first to see this flying disc we’ve been told for years that there isn’t such a thing, but all of us saw it.”

Declassified CIA documents attest to the veracity of this incident, as the government agency recorded the interviews it held with the eyewitnesses. The documents show there was also a fourth witness whose name was withheld as he was a civilian traveling alone and wasn’t part of the Senator’s group.

This fourth witness described the UFOs as being identical, with “a slight dome and a white light on top.” The edge of both discs were glowing with a pinkish hue, not unlike the glowing plasma created during an electrical storm or St. Elmo’s fire. This aspect could attest to the craft being equipped with some kind of electromagnetic propulsion system that ionized the air around them.

The UFO rose “vertically with the glow moving slowly around the perimeter in a clockwise direction, giving the appearance of a pinwheel,” the description read.

In the CIA report, interpreter Ruben Efron told the agents that visibility was ideal during the sighting and, despite the train moving, he had had a clear field of view. He was able to see that as it approached the train, the first UFO “gave the appearance of gliding.” “No noise was heard, no exhaust was heard, and no exhaust glow or trail was see by me.”

Documents show that in the moments following the incident, Sen. Russel took the matter very seriously with his aide and interpreter.

We saw a flying disc. I wanted you boys to see it so that I would have witnesses.”

A declassified FBI memo, dated one month after the events in Transcaucasia admits that Sen. Russel and Col Hathaway’s testimonies “would support the existence of a flying disc.”

UFO researchers believe the three men decided never to make their sighting public and keep what they had seen to themselves. The Fund for UFO Research’s Dr. Bruce Maccabee is of the opinion that the men never talk “because they were no doubt advised not to talk. ” He added that the documents “provide startling new evidence that UFOs exist.”

At the beginning of January 1957, Tom Towers of the Los Angeles Examiner published a letter from Sen. Russel in the Aviation New column. The letter was sent as a response to Towers’ inquiry into the sighting that had occurred in Russia. Somehow, the events transpired and Towers wanted to be the first one to get the scoop. This was Sen. Russell’s response:

“Permit me to acknowledge your letters relative to reports that have come to you regarding aerial objects seen in Europe last year. I received your letter, but I have discussed this matter with the affected agencies of the government, and they are of the opinion that it is not wise to publicize this matter at this time. I regret very much that I am unable to be of assistance to you.”

Previous Post: DID A CRASHING UFO CAUSE THE RECENT SIBERIAN EXPLOSION?

Next Post: DID NOSTRADAMUS PREDICT ALIENS WILL INVADE EARTH IN 2019?