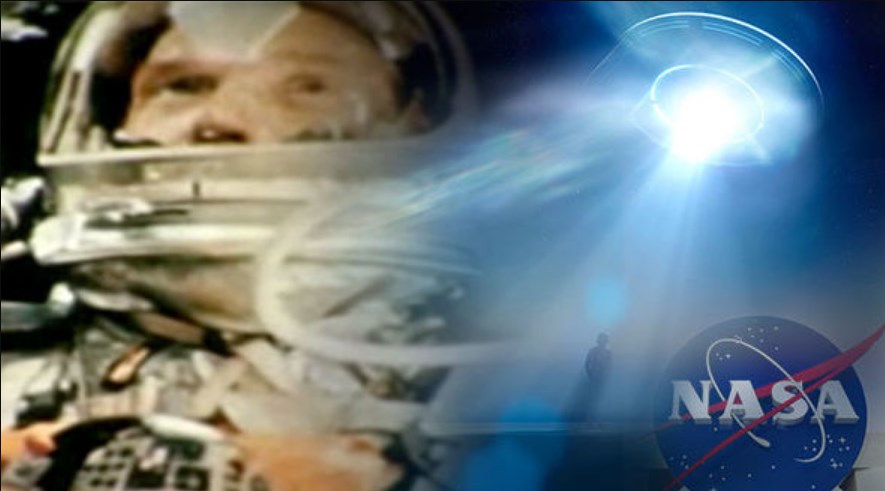 A NASA astronaut can be heard explaining his amazement at the sight of his capsule being surrounded by strange UFOs.
The recording is between astronaut John Glenn and mission control on Earth as he orbited Earth in a space capsule on February 20 1962 as the first US astronaut to do it for an extended period.In the audio Mr Glenn, who calls himself Friendship Seven, can heard describing seeing a “brilliant blue horizon” coming up behind him as it approaches sunrise.

Then, he suddenly realises something peculiar is happening as several UFOs appear.

He said: “This is Friendship Seven. I’ll try to describe what I’m in here.

“I am in a big mass of some very small particles that are brilliantly lit up like they’re luminescent.
Getty*YouTube John Glenn (left) filmed while viewing the unusual phenomenon.

I am in a big mass of some very small particles that are brilliantly lit up like they’re luminescent.

“A whole shower of them coming by.”

He was asked by mission control if he heard any impact with the capsule, to which he said no.

He added: “They’re very slow. They’re not going away from me more than maybe three or four miles per hour.”

He then gets no response for sometime as he continues to describe what’s happening.Mr Glenn said: “they do have a different motion from me because they swirl around the capsule and then depart back the way that I am looking.

“Are you receiving over…

“There are literally thousands of them.”
NASA footage of ice crystals in space as seen by astronauts.

He still gets no response and asks again if he is in contact with anyone, and continues to discuss the strange occurrence a number of times.

It is about four and a half minutes before he receives any response from mission control, when he is told he sounds a little “garbled” and is asked what his oxygen levels are.

No one from mission control addresses the strange event with Mr Glenn, who says that a few of the particles are still swirling around the capsule.

They still will not discuss it with him, so he starts taking pictures.

Eventually he is asked how big the particles are and if they move by or float with him.

It was suggested to him that the particles could be coming from the capsule itself, but Mr Glenn said this was not the case.

Later that year astronaut Scott Carpenter made a similar orbit on the Aurora 7 capsule and also saw the “fireflies.”

He was able to tap the sides of the capsule and make them float off.NASA scientists later concluded they were just ice particles that were being caught by sunlight.

They said the ice had accumulated on the outside of the capsule.

However, on Mr Glenn’s second orbit, he said he could see them for miles in each direction.