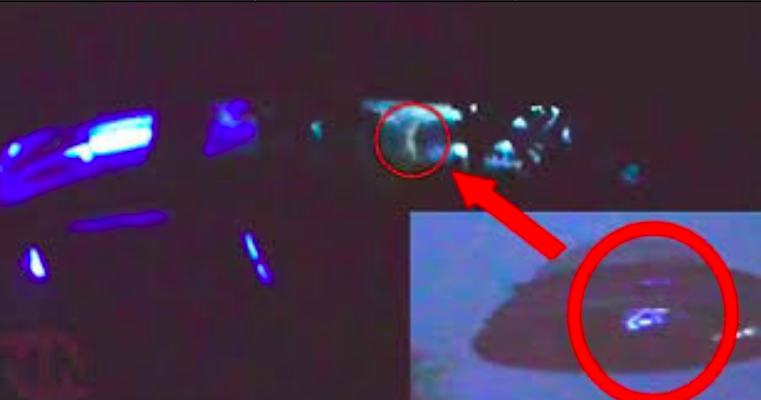 Stunning footage of an Alien walking inside a UFO has been captured by an amateur camera man as the jaw dropping footage has gone viral across social media.

The grainy footage reveals an object with blue lights behind some trees, but as the camera zooms in, a gray figure can be seen walking around inside it.

UFO fanatics, Blake and Brett Cousins posted the eerie footage as part of a live phone in, but little did they know that the video would explode across the UFO community with many followers claiming it was a Grey Alien.

“You know how the ship looks like it’s landed behind the tree, it looks like they were stationed there because the one walking by looks like it was wearing an orange space suit.”

The Daily Star reports: Believer, Brett, likened it to something from famous alien movie Close Encounters, before claiming there is no CGI at play.

“It didn’t even look like a human at all.”

“It possibly might be something with the government but it’s unexplainable.”

“In my opinion these things come from another planet.”

Another fan then called up offering a different explanation.

“I just watched this four times and this Alien Grey, he moves a lot like a human.”

Not everyone was as convinced by the footage, however.

“Nothing but light and mirrors,” one commented.

And another agreed, writing:

“Looks like someone camping and using fluorescent tube lanterns to light the camp site.”

Meanwhile, a set of crop circles appearing in the English countryside has caused a stir.

Previous Post: Reptilian Aliens and The Council of The 13 Royal Families

Next Post: Russia’s Secret UFO Files: The Conflicts with the Aliens