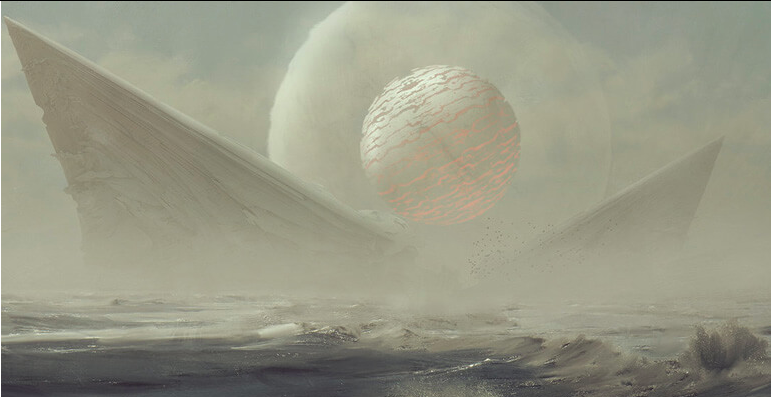 As humanity goes forward, new threats emerge as the old ones are being forgotten. Explanations for weird occurrences these days tend to be strictly related to present phenomena and world threats, denying what has happened in the past.

At the end of 2014, huge craters were discovered in the Yamal Peninsula by helicopter pilots surveying the area. At first, there were only two craters, with others being discovered shortly after. After examining the area, Russian researchers realized that the craters were more widespread than they first thought, with one large crater surrounded by 20 smaller holes.

At the moment, there are over 7 large holes with over 30 tiny ones, measuring over 230 feet in depth and 2,000 feet in diameter.

Recent exploration of the mysterious pits have shown that icy lakes have formed at their bottoms, with water cascading down their permafrost walls. Recent theories claim the craters were formed as a result of climate change, meteorite strikes, gas explosions from the underground or even nuclear tests. Each of these might sound plausible but the mysterious sightings seem to contradict all of this.

Judging by the smooth surface of the walls, also linear, and the lack of debris on the surface, we can’t possibly talk about a massive impact which caused all this. Besides, other craters have the same characteristics so there can’t be a coincidence regarding one of the holes.

Mighty eruptions of gas from an underground reservoir was the official information given so the local population wouldn’t panic, but considering the frozen lake at the bottom, this hypothesis seems rather wrong, as there is no big fissure in the icy surface. No one knows what is happening in these craters at the moment. We plan a new expedition. Anyway, we must research this phenomenon urgently, to prevent possible disasters.

In two cases locals told us that they felt earth tremors. The nearest seismic station was yet too far to register these tremors” – Professor Bogoyavlensky

So what might be the cause of this strange phenomenon?

Turning away from the scientific information because it doesn’t add up much certainty to the matter, I stumbled upon an interesting theory that connects the past to the present.

We now know that two of the huge craters turned to lakes, which implies a deeper trail inside the holes than it was first thought.

Siberia is a mystical place, with a lot of alien encounters over the last 100 years.

The Hollow Earth theory also applies here, as UFOs are believed to access the portal to inner Earth from here. And what place serves as a better cover-up than a lake in the middle of this desolate, icy landscape? Lake Baikal is found not far away from the Yamal peninsula. This ancient lake from the mountainous Russian region of Siberia is considered the deepest lake in the world, with a depth of over 2,400 feet, and is also renowned for its spectacular UFO sightings and alien encounters.

Are these mysterious craters linked to the Lake Baikal and the portals leading inside the Inner Earth ?

We think they might be, and here is why.

In 1977, two researchers named V. Alexandrov and G. Seliverstop, were in a submarine at a depth of 4,000 feet below the surface of Lake Baikal.

After they turned off their spotlights to explore the length of sunlight penetrating into the water, the scientists were bathed in light from a strange glow.

It was so like if our device was lit from above and the side by two strong spotlights. Only a minute later, unknown floodlights went out, and we found ourselves in total darkness” – V. Aleksandrov
Vyacheslav Lavretevich, a local lifeguard, recalled a similar incident.

We were on a yacht on Lake Baikal, and from under us flew out a huge glowing disk. It blinded us, and for a second flew into the sky.

We did not even have time to grab any cameras, although many of us saw it. It was huge, and lit up all of our yacht. It was probably 3,000 feet in diameter, a huge disk.

For three minutes it shone from below, and then abruptly departed in a second. The spectacle was huge, awesome, beautiful and shocking.”
Oleg Chichulin was also on a boat with his students. They all witnessed strange objects submerging into the lake:

There was a ball that glowed. And then this ball started to fade, and blush, and it turned into a red ball. This red ball lay on the water for a while, and then began to sink. And all this gradually went under water, and it became dark.”

In addition to the UFOs, there had been encounters of underwater aliens, wearing masks similar to our spacesuits. As described by Alexey Tivanenko, a doctor in history, in 1982, a group of seven military were at a depth of about 160 feet when they met swimmers, around three meters tall, dressed in tight-fitting silvery suits. They didn’t have any scuba or other apparatus, only helmets on their heads.

They were ordered to capture the strange beings, but they were surprised by some sort of flashing ray and washed ashore having signs of decompression sickness.

After this encounter, three of the seven military died, as one of the decompression devices they had was broken. Tivanenko shared some petroglyphs and images representing the aliens, all united by the same characteristics: tall beings, dressed in flashy suits, all with the helmets on their heads.

Besides this descriptions of strange encounters at Lake Baikal, there are countless others including some from the Russian folklore.

Once again, the mysterious craters from Siberia might be made by some sort of mechanism or even an UFO, as there is no reasonable explanation of another sort.

They might be breaches into the Earth’s crust, leading to the sacred ground of Shambala or the Inner Earth, the sacred place described by so many.