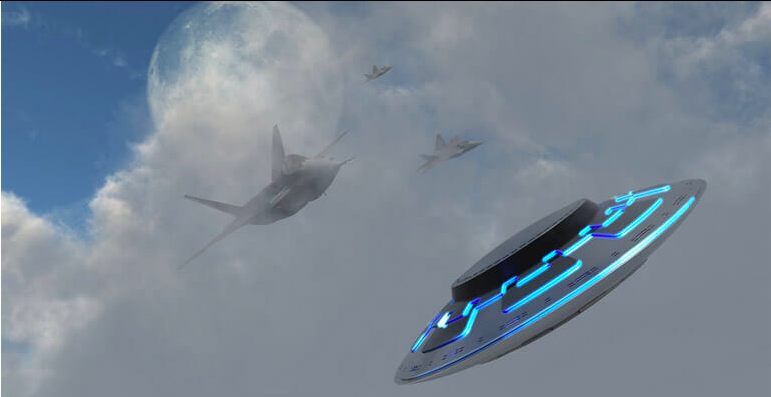 An ordinary day in the Mediterranean Sea, near Spain, has led to a series of unimaginable events, fortunately captured on tape by some local fishermen.

Apparently the footage was captured in late 2009, offering a relatively low quality image but, the streak of events that followed offer a shocking view of a UFO submerging into the Sea with military jets hot on its tail.

Turning the camera on with panic and confusion, the fishermen manage to surprise what seems to be two fighting jets coming in from the right side.

Over a short period of time, a UFO appears to the right, quickly submerging into the water, followed by the two jets that previously passed by the fishermen’s boat.

Panic can be read on the Galician fisherman’s face, unaware of what is happening.

While still in shock, the guy holding the camera surprises a military helicopter approaching the boat, with its personnel yelling at the crew to remain in position.

If this video is supposedly real, then we are witnessing a magnificent scene of an UFO chased and at the same time harassed by the military.

The fishermen’s face is cloaked, and so is the name of the boat for obvious protection reasons, leading towards the conclusion of the video being legit.

As it happens, the Mediterranean Sea has seen other encounters of such sort.

In 1968, a NATO squadron performing in the area on a battleship witnessed a similar event, this time during nighttime.

Strange bright lights appeared over the sea, performing a number of maneuvers and then disappearing into the sky. The lights were like flares and rose out of the water near the port beam.

There were five of these objects, at first coming out of the water and vanishing into the same place but, after a few minutes the mysterious objects rose out of the water and performed synchronized maneuvers, moving up and laterally in perfect formation. The entire scene lasted for about three minutes. After the bright UFOs performed their spectacle, they flew towards the sky, disappearing into the night.

Aliens and UFOs are believed to possess such technology that allows them to travel underwater or underground. They allegedly pick remote areas to perform their rituals and are sometimes surprised by humans, unaware of what is happening.

We are not surprised that aliens tend to run from us, as they get chased and sometimes even captured by the military or secret agencies. They try to offer us a peaceful lesson by not using their advanced technology against us.

In return for their friendly approach, we show the world how they are greeted by our Governments with battle devices meant only for destruction.

How will humanity manage to establish contact with these advanced species, which prove to exist after all, if all they receive from us is aggression and death?