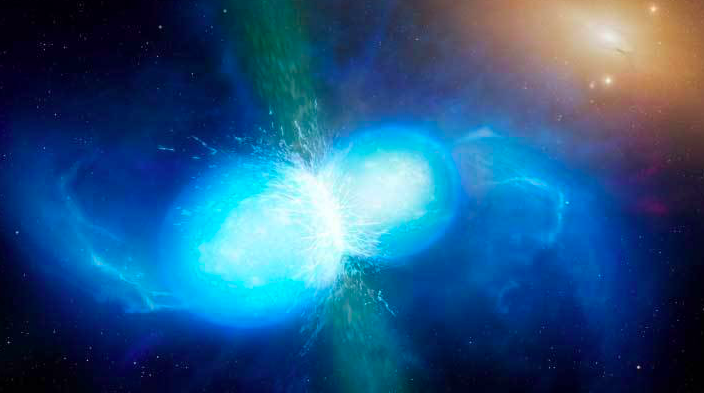 A violent collision of two neutron stars 4.6 billion years ago took place in the Solar Systemneighborhood and is considered the likely source of coveted minerals on Earth.

This single cosmic event is thought to have given birth t to around 0.3 percent of our planet’s heaviest elements including platinum, uranium, and gold.

The cosmic collision identified by Astrophysicists Szabolcs Márka at Columbia University and Imre Bartos (GSAS’12) at the University of Florida and their findings have been reported in the May issue of Nature.

“This means that in each of us we would find an eyelash worth of these elements, mostly in the form of iodine, which is essential to life,” Bartos explained in a statement. “A wedding ring, which expresses a deep human connection, is also a connection to our cosmic past before humanity and the formation of Earth, with about 10 milligrams of those that probably formed 4.6 billion years ago.”

“The meteorites forged in the early solar system carry the traces of radioactive isotopes,” Bartos said.

“As these isotopes break down, they act as clocks that can be used to reconstruct the moment they were created,” Márka added.

The two astrophysicists compared the structure of meteorites to numerical simulations of the Milky Way.

They eventually discovered that a single neutron-star collision could have happened around 100 million years prior to the formation of Earth, in our own neighborhood, approximately 1,000 light years from the gas cloud that eventually formed the Solar System we live in today.

Our galaxy itself is 100,000 light years in diameter or roughly 100 times the distance of this cosmic event from the cradle of Earth.

“If a comparable event happened today at a similar distance from the solar system, the ensuing radiation could outshine the entire night sky,” Márka said.

The scientists argue that their new study offers unprecedented insight into a significant event in our planetary history.

“It sheds bright light on the processes involved in the origin and composition of our solar system, and will initiate a new type of quest within disciplines, such as chemistry, biology, and geology, to solve the cosmic puzzle,” Bartos added.

“Our results address a fundamental quest of humanity: Where did we come from and where are we going?” Márka said. “It is very difficult to describe the tremendous emotions we felt when we realized what we had found and what it means for the future as we search for an explanation of our place in the universe.”

Previous Post: Mercury is the Closest Planet to Earth and Every Other World in the Solar System

Next Post: Your Personality According To The Ancient Egyptian Zodiac