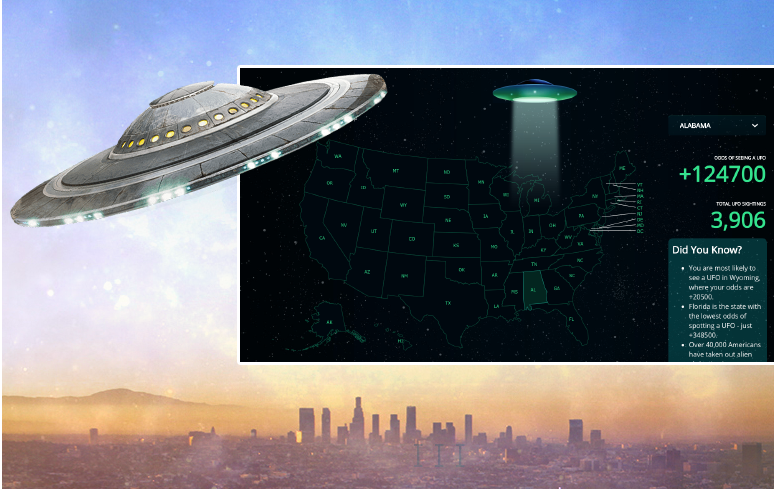 A team of researchers at Casino.org examined data records pertaining to reported UFO sightings and mapped out where the highest concentrations of sightings are across the US. Although many other countries are hotspots for UFO activity, the US is one of the biggest hotspots, and there are several reasons for that.

Editor David Sheldon stated, “While many of us are quick to dismiss UFOs as being the stuff of science fiction, there have actually been over 250,000 recorded sightings of UFOs in the USA alone. In addition, over 40,000 Americans are concerned enough about extra-terrestrial life forms to have taken out alien abduction insurance. And the US government takes them seriously enough to have set up The Advanced Aviation Threat Identification Program, elements of which are still classified. If you are concerned about lights in the sky, we strongly recommend you move to Florida which enjoys the lowest odds of UFOs streaking across the night sky.”

While Sheldon focuses a bit on the fear element here, most researchers can attest to the fact that there is nothing to fear. Many abductions, although not all, are actually human military related. This next statement is something you are going to have to check within your heart to know if it is true or not, but this is also a common message many abductees and whistleblowers have corroborated, ET’s commonly seen in our skies are not here as any threat. They are here to help us in our journey of shifting consciousness and look forward to the day of a greater contact with our population.

The threat narrative seems to be an agenda of the deep state to keep people afraid of the subject as they attempt to control the disclosure narrative.

First off, many craft people see are actually military black budget craft that have been reverse engineered from ET crafts over the past few decades. Many whistleblowers have attributed to this fact over the years. Secondly, there are in fact ET manned craft as there have also been several instances where UFOs have shot down or deactivated nuclear missiles or testing facilities unannounced to the military or government.

Sightings also help as a means for people to begin thinking beyond their everyday world i.e. expanding their consciousness. What does it mean that we are not alone in the universe? Who is the life in the universe and what are they like? (Not talking about the sad excuse for disclosure the scientific community chooses which refers to life as “bacteria”. We’re talking intelligent beings here.)

When we expand our consciousness outside of everyday life we begin to rethink what is possible and begin to reshape our world on a collective level. This, of course, happens over time, but the value in sightings is immense when you consider the change that can really be made as people begin to look into this subject and realize the true nature of our reality.

Below you can check out the hotspots via the interactive map. If you have trouble using the map embedded below, click here to view it on their website.

Next Post: THE BIGGEST SECRET THAT THE PENTAGON HIDES: ‘THE ANUNNAKI ARE RETURNING TO EARTH’