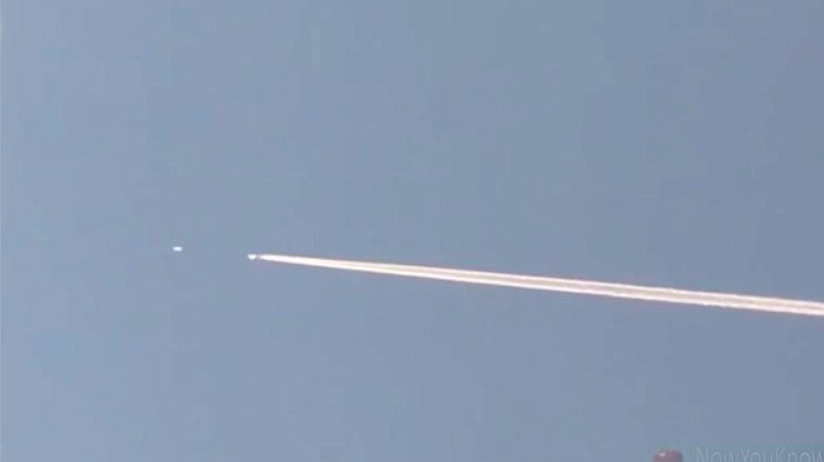 BIZARRE footage apparently showing a UFO speeding after and overtaking a passenger jet has sent conspiracy theorists into a frenzy.

The eerie clip shows a saucer-shaped object following the plane in its vapour trails before passing it completely.

The person who filed the clip said they were reading at home in Lincoln, New Hampshire, when they noticed the strange object close to the aircraft.

They said: “I am told that military pilots train in the mountains around where I live and I’ve always enjoyed seeing them fly through.

“This happens all the time, jets and helicopters are a common sighting.

“So I naturally saw the jet and did a double take, because there was something following it.”

The shocked witness added: “I immediately thought I was witnessing some strange aircraft, possibly military but it was not a jet.”

An alleged UFO in apparent proximity to a passenger jet has caused a You Tube sensation.Source:Supplied
“The UFO was gaining on a jet. No helicopter could do that. I was blown away and luckily got out my phone in time to take a video.”

The footage was captured in 2016 but it was recently shared on YouTube and has racked up over 27,000 views.

One user wrote: “I am actually baffled. This looks legit, as to why — who knows.”

Another had a different explanation: “It’s two planes travelling at different altitudes, one creating a vapour trail.”

But the witness is convinced the sighting was supernatural.

They said: “I was very excited and anxious.

“I felt I had witnessed something very hard to dismiss as a “weather balloon” or some obvious type of aircraft.

“Shortly after the jet and object left my range of sight I saw three more jets and 1 helicopter going the same direction (in my opinion chasing the UFO).”