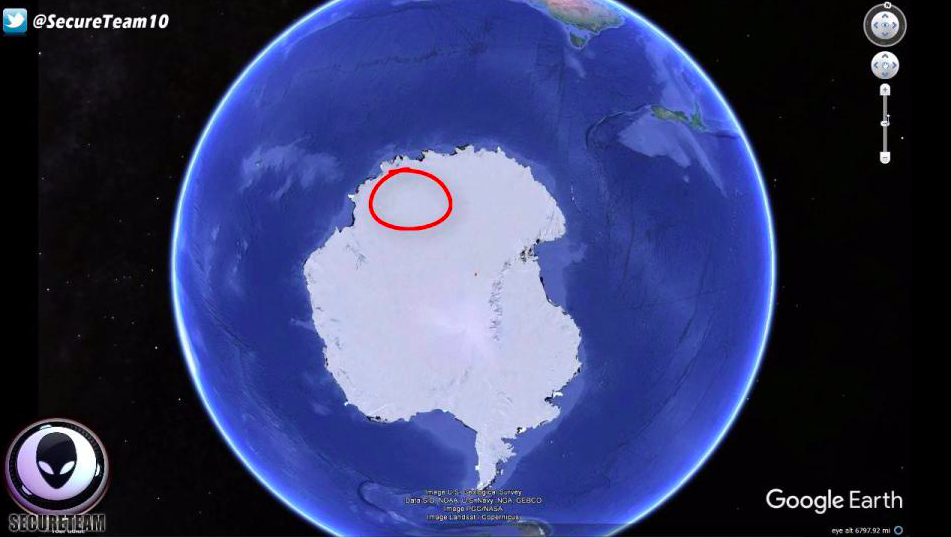 SCIENTISTS believe a massive object which could change our understanding of history is hidden beneath the Antarctic ice.

The huge and mysterious “anomaly” is thought to be lurking beneath the frozen wastes of an area called Wilkes Land.

It stretches for a distance of 151 miles across and has a maximum depth of about 848 metres.

Some researchers believe it is the remains of a truly massive asteroid which was more than twice the size of the Chicxulub space rock which wiped out the dinosaurs.

If this explanation is true, it could mean this killer asteroid caused the Permian–Triassic extinction event which killed 96 percent of Earth’s sea creatures and up to 70 percent of the vertebrate organisms living on land.

However, the wilder minds of the internet have come up with their own theories, with some conspiracy theorists claiming it could be a massive UFO base or a portal to a mysterious underworld called the Hollow Earth.

This “Wilkes Land gravity anomaly” was first uncovered in 2006, when NASA satellites spotted gravitational changes which indicated the presence of a huge object sitting in the middle of a 300 mile wide impact crater.

Now the internet has lit up with discussion of the mysterious observations after the UFO hunting crew Secure Team 10 posted a YouTube video about the anomaly.

“To this day, scientists have no idea or way to discover exactly what is buried deep under this thick ice shelf,” the video narrator said.

“This continent has been shrouded in a mystery of its own for years now.”

Secure Team 10 suggested the Nazis built secret bases in Antarctica during World War II, which were designed to be used by flying saucers.

The UFO hunters added: “There is some evidence of this coming to light in recent years, which images purporting to show various entrances built into the side of mountains, with a saucer shape and at a very high altitude.

“This begs the question: how would you enter these entrances without something that could fly and was the same shape as hole itself?”

Secure Team also suggested the US Navy led a mission to investigate the mysterious continent.

This expedition was called Operation High Jump, which conspiracy theorists believe was an attempt to find the entrance to a secret world hidden underneath Earth.

However, the scientist who first spotted the anomaly believes it is actually evidence of a massive impact crater.

“This Wilkes Land impact is much bigger than the impact that killed the dinosaurs, and probably would have caused catastrophic damage at the time,” said Ralph von Frese, who was a professor of geological sciences at Ohio State University when he discovered the “killer crater” on 2006.

“All the environmental changes that would have resulted from the impact would have created a highly caustic environment that was really hard to endure. So it makes sense that a lot of life went extinct at that time.”

Previous Post: An Enormous Floating Object Appears on the Great Lakes, UFO, Ghost Ship or Something Else?

Next Post: A Mysterious UFO Falls From The Sky in Alaska and Nobody Knows What It Is!