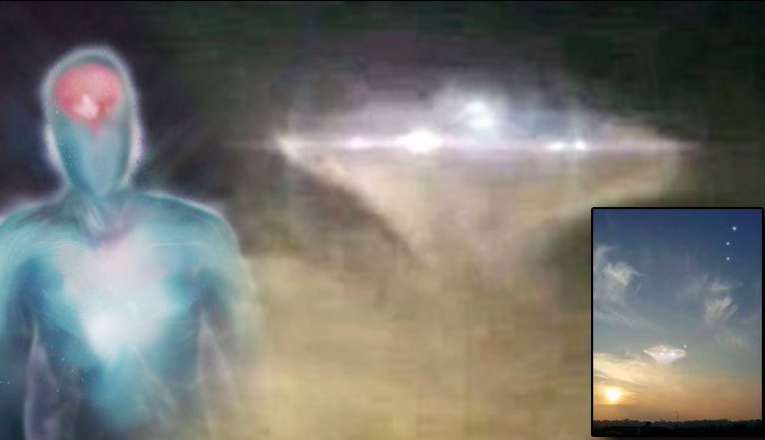 In 2016, the Italian city of Lecco became witness to a bizarre event featuring what some believe to be an advanced Pleiadian UFO.

Photos showing what appears to be an interdimensional craft hovering over the picturesque city have captured the attention of UFO enthusiasts all over the world and are cited as clear evidence of alien intervention. The controversial images were taken on November 2 by Giuseppe Filipponi and posted on Facebook the following day. They were viewed by thousands and quickly went viral.

The images show an enormous, translucent craft that materialized in the sky after traveling through an interdimensional portal, or so it’s been described. The perplexing craft then began to deploy a number of smaller, orb-type devices or entities. These smaller orbs appear as spheres of light and are believed to act as the UFO’s surveillance drones. This sighting elicited numerous and diverse reactions, once again proving that this subject is open to discussion.

Some consider there was nothing unnatural behind this apparition and cite the most likely culprit as a freak weather phenomenon involving a cumulonimbus cloud. Their argument is that pareidolia makes people see things and recognize familiar shapes in places where most of the time there isn’t anything.

On the other side of the table we have a great number of alien aficionados who are convinced the photos actually show the extraterrestrials’ vested interest in mankind and its problems. They don’t see this sighting as a coincidence but rather as a consequence of the country being hit by multiple earthquakes over the past few months. Since August, Italy has bore the brunt of over 250 tremors, the strongest of which left hundreds dead and thousands homeless.

The most recent earthquake to strike Italy occurred on October 30 and seismologists are calling it the strongest in nearly half a century. It’s pretty obvious that the boot-shaped peninsula is going through some tough times.

This argument is what leads believers into suspecting the ethereal craft belongs to one of the ‘good guys’ who are currently keeping Earth under observation, as evidenced by the video below:

The Pleiadians, also known as Nordic aliens are a race of highly-advanced, benevolent beings that originated on a planet orbiting one of the stars in the Pleiades group. Also known as the Seven Sisters, the Pleiades are one of the closest star clusters and they’re also visible with the naked eye. They occupy an important role in the mythology and star culture of many ancient civilizations, and this has lead many into believing the Pleiadians have been supervising humanity for a long time.

Alien hunters claim that although Pleiadians have a physical form which is strikingly similar to the Scandinavian physiognomy, they can also take on an incorporeal form that allows them to travel between dimensions. Unrestrained by physical forms, the Pleiadians are free to explore realms we couldn’t even comprehend. Although their true motivations remain hidden to us, their actions reveal a compassionate response to our struggle.

In the particular case of last week’s sighting, we could assume the craft was sent to investigate the increased seismic activity in the Italian peninsula. The appearance of the ghostly starship could be interpreted as a warning signal that things beyond our control may come to pass. Although as humans we enjoy a strong hold on Earth, this is only an illusion. The fact that there are over 7 billion of us alive today gives the false impression of stability. But we are still at the mercy of Mother Nature and with one fell swoop, we might not be here tomorrow.

This deception of security must be plenty obvious for our hyper-advanced observers, which is why they are always nearby when disaster strikes. And just because we don’t see them intervene on our behalf, that doesn’t mean they’re idly standing with their hands behind their back. Who knows how many catastrophes they helped avert without us knowing?

Previous Post: THE TRUTH IS OUT THERE! HUNDREDS OF ‘UFO AND ALIEN SIGHTINGS’ IN UK REPORTED TO POLICE