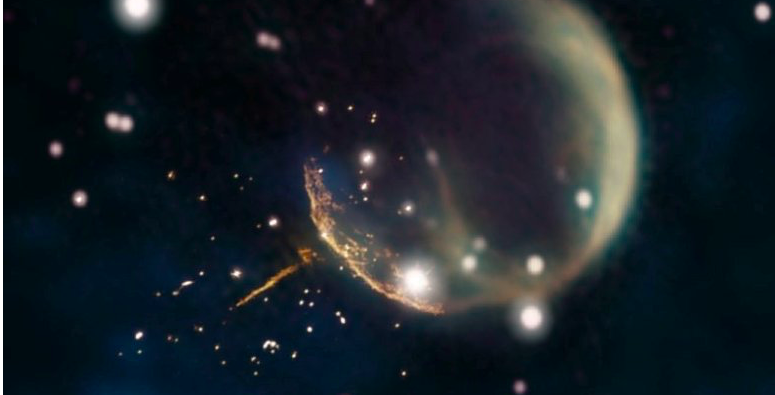 There’s a strange star speeding through our galaxy at unfathomable speed.

PSR J0002+6216 was spotted by astronomers traveling through our galaxy like a lone runner at a speed of 2.5 million miles per hour, or nearly four million kilometers an hour.

PSR J0002+6216 has been found to be traveling at 1,130 kilometers per second (700 miles per second) which means that if it were traveling from Earth to the moon, it could get to its destination in less than 6 minutes.

The star was seen as it zooms away from an expanding cloud of a recent supernova explosion. And as it makes its ways through the galaxy, it is leaving behind at a massive cosmic trail, after punching through the explosion’s outer shell of debris.

Astronomers have revealed that the tail extends around 13 light years, and is seen pointing back to the center of the supernova.

As the star spins on its axis traveling through space, if the jets of electromagnetic radiation line up with Earth, we seem them like a kind of cosmic lighthouse.

“Thanks to its narrow dart-like tail and a fortuitous viewing angle, we can trace this pulsar straight back to its birthplace,” explained Frank Schinzel, a scientist at the National Radio Astronomy Observatory (NRAO).

“Further study of this object will help us better understand how these explosions are able to ‘kick’ neutron stars to such high speed,” Schinzel added.

According to astronomers, the pulsar is located around light years from the center of a supernova remnant called CTB 1.

PSR J0002+6216 was found to be traveling through the galaxy five times faster than the average speed of a pulsar.

Astronomers say that PSR J0002+6216 is faster than 99 percent of Pulsars with measured speeds.