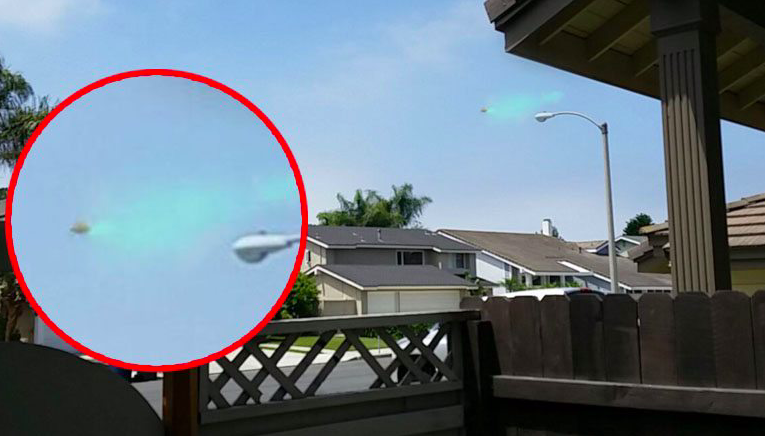 Alien hunters are perplexed by a set of photos showing what appears to be a UFO spraying a greenish mist over a Californian neighborhood.

The sighting is currently under investigation by MUFON, the authority that reviews all such cases. According to the witness testimony, the UFO showed up over Huntington Beach, California on a sunny summer day when visibility was great.

At first, the unnamed witness believed he was seeing a plane in trouble.

I looked up to see what I first thought was a passenger plane on fire,” he told MUFON

But this conviction did not last long. Within a few seconds, the accidental bystander realized the object couldn’t have been a plane. It had a dome-like shape with a band of orange lights going around its circumference, a typical UFO shape that is instantly recognizable.

At that moment, the eyewitness considered the possibility that the unidentified object was experiencing some kind of technical difficulty. However, no smoke or fire was visible so the emission of green vapor could have been a deliberate action.

“The vapour trail didn’t seem to be coming from any particular vent or place on the craft, it seemed to almost enshroud the craft and then slip off and fall behind,” the witness added. “It would leave a trail and dissipate within a few seconds.”

According to the eyewitness, the emission of green gas coincided with the UFO making a rumbling sound.

THE RUMBLING HISS SEEMED TO INCREASE IN INTENSITY COINCIDING WITH THE BILLOWING EMERALD GREEN SHIMMERY MISTY VAPOUR OR SMOKE THIS CRAFT WAS LEAVING IN ITS WAKE.”

The strange, intense color of the ejected material was both “concerning and fascinatingly beautiful,” the bystander claimed. But as beautiful as it looked, the menacing aspect of the incident gave birth to strong feelings of anxiety and all the way up to an overwhelming, visceral emotion.

Believing the vapor could be poisonous or radioactive, the witness almost threw up his breakfast. Fortunately, he was able to control himself and even managed to snap a few photos of the UFO spraying an effluvium of green gas.

It’s difficult to discern the object’s size from the photos, but the witness states that it was pretty large, around the size of a school bus.

This sighting raises a number of legitimate questions and their answers are not pleasant.

What was the UFO doing over California in broad daylight? Was it having trouble or was it deliberately delivering a payload of chemicals?

If the green vapor was the result of malfunctioning systems, it would definitely prove the UFO was using exotic matter as fuel. In that case, the witness was right to fear the fumes could be poisonous or even radioactive.

Since he stated the vapor dissipated within seconds, it is safe to assume the vapor was indeed physical and not some visual effect manifested by its cloaking systems.

Most UFO experts who’ve seen the photos agree that a UFO spraying a strange, noxious-looking green vapor could not have been an accident. It looks and sounds premeditated.

What we’d like to know is this: was the UFO piloted by aliens or our own kind?

The UFO/conspiracy community has been pretty vocal about its suspicions regarding man-made or acquired UFOs being secretly operated with the intention of making the public believe it was aliens. Veiled by a misconception they seeded themselves, the human operators of the craft could perform whatever experiment they pleased without fear of consequence.

The same scenario also applies if aliens were piloting the UFO. There’s not much we could do about aliens performing experiments since their technology is too far ahead of ours. We can only speculate about their motivation and what they have in store for mankind.

Next Post: THE WORLD IS PLAGUED BY NUMEROUS REPORTS OF SHAPESHIFTING UFOS