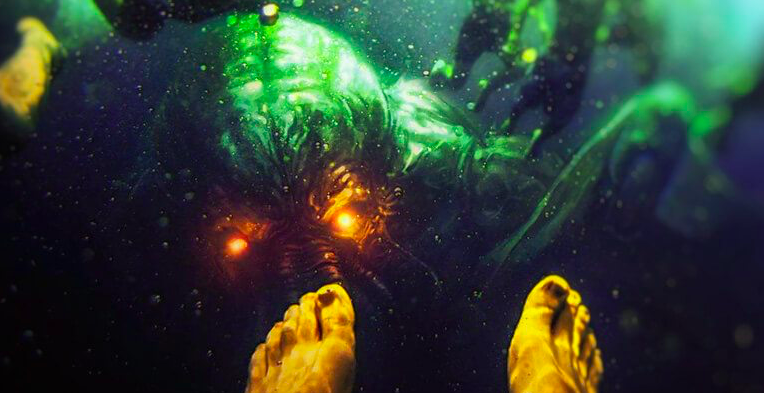 Russia is home to a great number of mysteries, each one stranger than the other. The following case is no exception.

Although these particular events have been happening for thousands of years, our story begins in the 1930s, when a Russian researcher of the paranormal named Ilya Grabovsky was exploring strange happenings around Lake Issik Kul, a deep body of water located in the Northern Tian Shan Mountains. “Issik Kul” means “Warm Lake”, a reference to the fact that the lake never freezes, despite being surrounded by icy mountains.

Grabovsky had heard legends about hidden caves in the area so he contacted a local who had inadvertently stumbled into one. At first, the man was reluctant to describe his experience but the paranormal researcher eventually persuaded him to pass the knowledge. He told Grabovsky that he and his friends were fishing on the lake’s northwestern shore when they saw a cave. It was inaccessible so they resolved to return the next day with ropes, torches and pickaxes.

The following day, the men began exploring the cave and made a startling discovery inside its innermost sector. They discovered three human skeletons, each one measuring more than ten feet tall. Around their necks, each skeleton had a silver amulet in the shape of what the men described as “bats.” An interesting aspect, since there have been several reports describing UFOs of this particular shape, not just in Russia but also the rest of the world.

Even more intriguing is a local Kyrgyz legend that references a sunken city on the bottom of lake Issik Kul. The last ruler of the ancient city had been King Ossounes, a giant with “long ears.” The legend also mentions that Ossounes was able to fly between the mountain peaks “in the blink of an eye.”

This discovery frightened the men enough to keep silent about it for years, but not enough to leave the silver amulets behind. They melted the jewelry and sold the silver but kept a small fragment as a memento. No photograph of this fragment survived to this day but Grabovsky would later write that the Soviet scientists who got the chance to examine it were unable to determine its exact age.

Galvanized by the fisherman’s admission, Grabovsky decided to dig deeper into the mystery. Rummaging through local archives, he stumbled upon the earliest mention of similarly-gigantic creatures, dating back to the mid 1800’s. A group of Georgian boys (at that time, Georgia was part of the Russian Empire) were diving for mussels in Lake Issik Kul when they happened upon the underwater entrance to a cave inside the nearby mountain. As you probably guessed it, the cave was home to the last earthly remains of several giants. Despite his best efforts, Grabovsky never found this cave. Or maybe he did but kept silent. Either way, the official version is that he died without sharing the results of his work with the rest of the world. But this isn’t the end of the story.

In the early 1980’s, Lake Issik Kul became the go-to place for Soviet testing of torpedoes, underwater missiles and military diving equipment. It was also one of the places where the Soviet military conducted periodic training of the recon divers known as “frogmen.” Another location was the already infamous Lake Baikal.

In 1982, during a frogmen training exercise in Lake Baikal, the divers encountered a group of strange underwater swimmers. The aquatic humanoids were enormous (more than ten feet tall) and, despite swimming in frigid waters, they wore nothing but tight-fitting silver suits. Although the beings were spotted at a depth of over 150 feet, none of them wore anything resembling scuba gear. They only had sphere-like helmets concealing their heads.

Naturally, this encounter determined the Soviet military leaders to attempt an expedition to catch one or all of the underwater humanoids and a group of seven frogmen was assembled and dispatched to the area. Former Afghan War veteran and author Mark Shteynberg, who has extensively researched this case, recalls:

“As the frogmen tried to cover the creature with a net, the entire team was propelled out of the deep waters to the surface by a powerful force. Because autonomous equipment of the frogmen does not allow surfacing from such depths without strict adherence to the process of decompression stops, all of the members of the ill-fated expedition were stricken by aeroembolism, or the Caisson disease. The only remedial treatment available consisted of an immediate confinement under decompression conditions in a pressure chamber. They had several such pressure chambers in the military region, but only one in working condition. It could contain no more than two persons.

Those local commanders had forced four frogmen into the chamber. As a result, three of them (including the CO of the group) perished, and the rest became invalids.”

As a direct result of this incident, Major-General V. Demyanko, the Commander of the USSR Military Diver Service was flown in to the military base at Issik Kul to inform the local officers about the dangers of attempting to capture the giant underwater humanoids. This serves as evidence that the Soviet high command was well aware of the presence of such creatures in both Lake Baikal and Issik Kul. Would they have issued an order against their capture if the creatures weren’t a real presence?

Not long after that, the Engineer Forces of the Ministry of Defense issued a bulletin addressed to the staff headquarters of the Turkmenistan military region. The bulletin noted many other lakes where similar aquatic humanoid sightings had been reported, alongside the usual flying disks and spheres ascending from and diving into the deep. This leads us into believing the incidents at Lake Baikal and Issik Kul were not singular events, but rather expressions of a much wider phenomenon.

The veracity of this incident is supported by the admission of Russian writer Mikhail Demidenko. After becoming familiar with Shteynberg’s account in 1992, Demidenko remembered spending some time at Lake Baikal in the mid 1980’s, on an assignment from the USSR Union of Writers. It was there that Irkutsk fishermen told him how they saw Soviet divers being thrown out of the water and continuing their ascent to a height of 30-50 feet above the water surface. The fishermen didn’t know about the underwater humanoid episode and had been wondering why the Soviet military subjected their divers to such tests.

So, is this case definitive evidence that Russian lakes are home to a race of giant aquatic humanoids? Not nearly enough, because more palpable proof is needed. But the continuous existence of legends and the admissions of retired high-ranking military officials, such as Col. Vladimir Azhazha seem to suggest there is something lurking in the unexplored depths of our planet.

Previous Post: THE MYSTERY OF THE ‘MUMMIFIED ALIENS OF NAZCA’ SHOULD ‘CHANGE WORLD HISTORY’