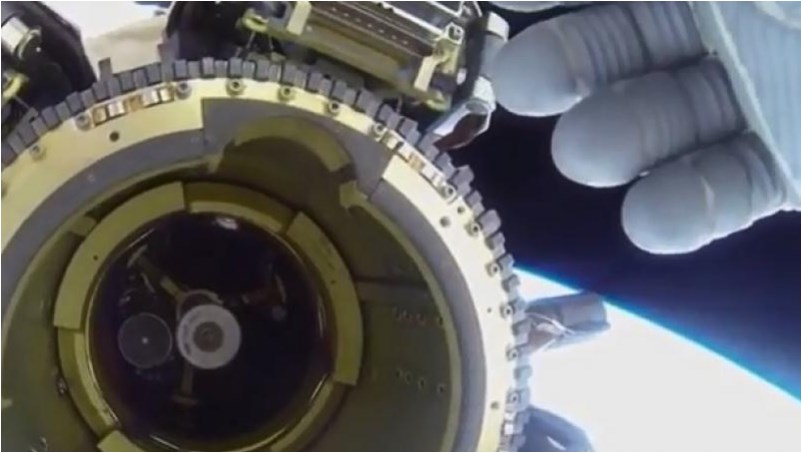 The live stream of the International Space Station has been a huge hit with conspiracy theorists as they can watch space in real time and be on the lookout for UFOs passing the space station.

Now they believe that such an event occurred and an astronaut was caught deliberately trying to cover up a UFO.

The recording of the video was said to have been over the weekend, and it seems to show a white UFO object flying in the distance of the International Space Station. Suddenly viewers watching the live feed saw the huge gloved hand of the astronaut trying to obscure the view.

Many conspiracy theorists have said that the timing of the object and the hand trying to block it in is a huge coincidence and this led many to say that the astronaut was told to try to hide the object in the background using his hand to block the live camera. The UFO is difficult to see when the video is playing normally and it is only visible when the footage has been slowed down. This might suggest that the astronaut did not try to block it from view as it would have been moving too fast and it is unlikely that he saw it. So maybe it is a big coincidence that he puts his hand there after all.

When the video is slowed down an object can be seen on the left, and it appears before then seemingly changing direction and then taking off at high speed. The object is a white blur, and then the hand of the astronaut comes down to the place where the object was before it sped off at high speed. Perhaps someone had communicated with the astronaut outside the ISS and told him to block the view at the same time that the UFO sped off?

If the object was a UFO, it is likely that NASA would have simply cut off the live feed to the camera. This is something that they have been accused of in the past numerous times when watchers of the live feed have said that they have seen a UFO in the background. However, there is no doubt that the sudden appearance of a strange object in the background and then the reaching out of the hand of the astronaut is very suspicious and only adds to the theory that NASA is keeping UFOs a secret.

Previous Post: UNDERWATER UFO BASE DISCOVERY PROVES SOMETHING ELSE IS LIVING IN OUR OCEANS!

Next Post: Underwater ‘UFO’ Was Pinned to Coast of North Atlantic By US Nuclear Attack Submarines