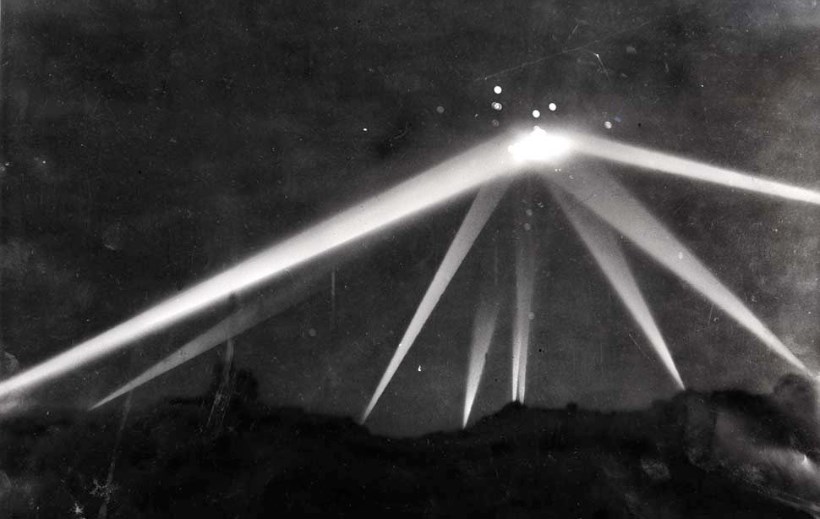 Below is some witness testimony from the event, his name was  Scott Littleton, a Professor of Anthropology, Emeritus, Occidental College, Los Angeles, CA

“The two of us stood side by side in front of the house, huddling together in the chill night air and staring up into the sky. The planes we’d heard were not in sight, but what captured our rapt attention was a silvery, lozenge-shaped “bug,” as my mother later described it, that was clearly visible in the searchlight beams that pinpointed it. Although it was a clear, moonlit night, no other details could be discerned, despite the fact that, when we first saw it, the object was hanging motionless almost directly overhead. Its altitude is hard to estimate, especially after all these years, but I’d guess that it was somewhere between 4,000 and 8,000 feet. This may explain why we didn’t see the orange glow reported by several eyewitnesses in Santa Monica and Culver City, where the object was apparently much lower. (One witness suggests that this glow may simply have been the reflection of shell bursts against the object’s “silvery” body.)”

The official explanation for the event ranged from “nothing happened” to “balloons,” but all those who’ve studied this phenomenon in depth know that it’s been wrapped in secrecy for a very long time and the lid is just beginning to blow. The only problem is, all of the witnesses described something very different from the official explanation.

“Behind the scenes, high ranking Air Force officers are soberly concerned about UFOs. But through official secrecy and ridicule, many citizens are led to believe the unknown flying objects are nonsense.” Former head of CIA, Roscoe Hillenkoetter, 1960

This isn’t the first time something like this has happened, in 1997 people in Arizona witnessed something truly spectacular. As UFO researcher Richard Dolan describes it:

“People in Phoenix were treated to an amazing display of hovering lights over the city. These lights appeared to be motionless and in perfect formation. They were truly an astounding sight to behold: an enormous semi-circular string of lights in the night sky.”

Fife Symington, the Governor of Arizona at the time, even held a press conference that featured a large and costumed alien mocking all of the UFO enthusiasts, but it seemed goodhearted in nature and, according to him, was done to lighten the mood.

What is interesting to note, however, is that Fife was keeping something to himself – he actually witnessed the event, and the former Air Force veteran spoke out years after the event (when his stint as governor ended) saying:

“If you had been here 10 years ago, standing out here and looking out there at the lights, you would have been astounded, you would have been amazed. I suspect that unless the Department of Defense can prove otherwise, then it was probably some form of alien spacecraft. It was enormous and it just felt otherworldly, in your gut you could just tell it was otherworldly.”

Previous Post: Trump’s Administration Has Been Briefed About UFOs – According To Steven Greer

Next Post: UFO CAUGHT ON TAPE DURING RECENT VOLCANIC ERUPTION IN JAPAN